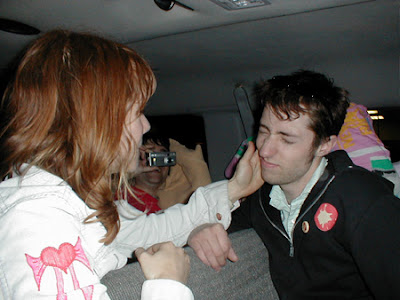 In a NewMatilda article earlier this week, yours truly made the following prediction ...

Caroline Overington will convert to Judaism, only to be rebuffed by the new Federal Member for Wentworth.

If news reports coming out from Wentworth are correct, my prediction may have proven prophetic. Well, sort of. Read this ...

Polling booth attendants and voters were shocked to see Ms Overington stride up to Mr Newhouse, strike him across the face and then walk away, those who saw the incident told AAP. One witness at the Bellevue Hill Public school polling booth said Ms Overington yelled abuse and appeared furious.

"At first we thought who was this woman yelling at Newhouse, then she slapped him and we realised it was Caroline Overington,'' the witness said."There was an incident and we are considering our options,'' Mr Newhouse's spokeswoman said.

"It was Ms Overington,'' she said.

Overington is one of the most important cogs in the neo-Conservative wheel at the heart of editorial and op-ed universe at The Australian. If the above-cited report is true, one wonders if genuine conservatives in Coalition circles (if any are left) would want to be associated with this cabal in the future.

In short, get a grip!