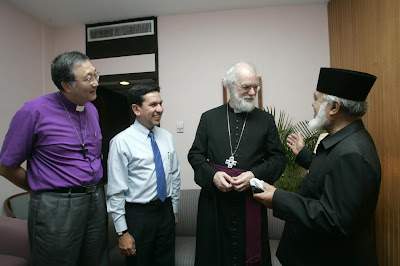 What I notice is that in each place the Archbishop talks about the possible application of sharia, he also mentions Orthodox Jewish sacred law. Those who claim that Islamic law and the English common law are mutually exclusive should consider that their objections equally apply to the sacred law and jurisprudence of Orthodox Judaism.

It's particularly amusing when commentators of Jewish background (such as Melanie Phillips) condemn the Archbishop without bothering to read his speech. The caustic remarks Ms Phillips makes about sharia are equally applicable to Jewish sacred law. Islamic jurisprudence doesn't have a monopoly on capital punishment for sexual crimes or on apparently sexist family and estate laws.

A Muslim view on the issue can be found here. The author notes that Muslim response to the Archbishop's proposals has generally been negative.

My own views on this latest cultural mass debate are expressed here and here.

An Australian Christian cleric has defended the Archbishop at ABC Unleashed here. According to this report in the Financial Times ...

Church of England representatives on Monday rallied round the archbishop of Canterbury, Rowan Williams, after he publicly repented for the “distress and misunderstanding” caused by his stance on Islamic law ...

The assembled delegates – over 450 bishops, clergy, and lay men and women – rose almost to a person to applaud Dr Williams as he addressed them and gave him a similarly warm ovation after the speech.

Dissenters were muted and those who called for his resignation were reduced to a minority of two.

“Dr Williams has shown outstanding leadership and signalled that the Church must move on from this controversy,” said Nicholas Reade, the bishop of Blackburn.

No doubt the comments and criticisms will continue. The irony is that sharia and English law had been interacting in England's colonial possessions for centuries. Funny how some people conveniently overlook that.

Personally, I must say i do have some serious reservations about any proposal to recognise sharia or other sacred law that does not provide the parties with an appeal mechanism. Naturally, I am very opposed to even the partial implementation of sharia-based (or indeed any) capital punishment.

I also think that Muslims who believe sharia-based tribunals can and should operate in a common law jurisdiction should study the Beth Din model and see how it operates. The Beth Din model has been particularly useful in resolving disputes involving religious institutions as well as civil disputes. Given how busy our courts are and the waiting lists involved, I'm sure secular courts would appreciate any assistance they could receive from any method of alternative dispute resolution!