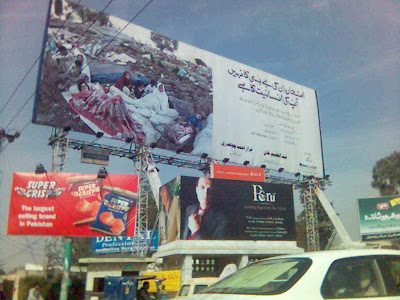 Pakistan was meant to co-host the 2011 World Cup along with India, Bangladesh and Sri Lanka. Yet according to a report by the Press Trust of India, it seems that at least Indian cricket official would like Pakistan dropped off the list of countries. Still, it's unlikely Pakistan will be be a co-host given the security lapses arising from the Lahore attack. I think the Pakistani cricket officials need to be a bit more realistic. At least one official has been quoted as saying:

We were expecting some words of support from the Indian Board even though we know that realistically speaking World Cup matches are unlikely to be held in Pakistan following the unfortunate incident ... We would think that since the tournament is to be hosted in four countries in the same continent, the ICC and its member boards can wait for another six months to see how the security situation improves in Pakistan before taking a final decision on the matches in Pakistan.

A ban on international games being hosted in Pakistan would be perhaps the most effective way to make ordinary Pakistanis feel isolated. Pakistan is cricket-crazy, and many Pakistanis will feel they are being boycotted in the same manner as apartheid South Africa was once the subject to a sporting boycott. Except that in Pakistan's case, there is no apartheid in place.

The Sri Lankan players have said that they were able to respond as effectively as they did to the attacks because they have become accustomed to terrorism. The Economic Times of India quoted captain Mahela Jayawardene on 5 March as saying:

We have been brought up in a background of terrorist activities. We are used to hearing, seeing these things — firing , bombings. So we ducked under our seats when the firing began. It was like natural instinct ...

The attack took place about 500 metres from the Gaddafi ground (in Lahore) by unidentified gunmen who attacked the bus in which we were travelling. During the attack every player took shelter by ducking inside the bus. The security vehicle for the players was also attacked , besides the bus ...

We wish to forget this incident, put it behind us and look forward and concentrate on our future matches. We were lucky to come out of the attack ...

We were not aware of security lapses. It’s an unfortunate incident. In hindsight, this could have happened anywhere in the world.

Omar Waraich writes in Time about some responses by ordinary people in Lahore, where a makeshift memorial has been set up to remember the police officers who died in the attack.

Near the edge of the grassy roundabout in Liberty Square where gunmen attacked the tourists' bus, activists, lawyers, policemen and ordinary citizens arrived to lay flowers by a sign saluting the bravery of Tanveer Iqbal, one of the six Pakistani policemen slain in the raid. Some raised their cupped hands in prayer, others solemnly held up candles. A large banner expressed solidarity with the "heroes of Sri Lanka." ...

"I have come here to pay tribute to my martyred colleagues," says Anjum Akhtar, a Lahore-based policeman, as he lays a bouquet of roses by the memorial. Akhtar laments that terrorist attacks have become "routine." "It's something we sadly share with the people of Sri Lanka, they suffer terrorist attacks, too," he says. But Tuesday's attack on the Sri Lankan team was different, the stocky policeman believes. "This time they attacked our country and our guests." ...

Even as Pakistan's vicious wave of militancy has spread eastwards from the Afghan border areas in recent years, sporting events have remained largely immune. The sole exception was a 2002 suicide attack outside the Karachi hotel where a visiting New Zealand cricket team were staying. Zafar Khan, the bus driver killed in Tuesday's attack, had driven for the Kiwis, too.

While fundamentalist clerics have issued fatwas against yoga in Indonesia and against the Indian tennis star, Sania Mirza, some Pakistanis hasten to point out that no equivalent edict has been voiced against cricket in Pakistan. "There are two pastimes that the Taliban really like," says Hameedullah Khan, a journalist from the Swat valley. "Playing cricket and drinking Mountain Dew."

Many in Pakistan are critical of the government. As in most democracies, when all else fails, locals prefer to lay all blame on the government. In this case, their arguments perhaps aren't without foundation.

Like many in the Liberty Square area, Ahmed is also critical of the government's failure to provide the Sri Lankan team with sufficient protection. "The team was here as our guests, but they left frightened and injured," Ahmed says, his voice thick with emotion. "It was our responsibility to protect them. Our government is so useless that they couldn't take care of the Sri Lankans. There is now a big threat to our national game. If Sri Lanka was able to play and leave safely, others would have been encouraged to come over here and play also. Now no one will come. Our image has been damaged across the world, and our national team is left useless, with no one to play."

Outside the landmark red-brick Gaddafi stadium renamed after the Libyan leader in 1974, marketing agent Tariq Mahmood sits forlornly with the morning's newspaper. He was meant to have spent the day watching the third day of the test match with Pakistan. Instead, he casts his eyes over the headlines and photographs with despair.

Living in Lahore, Mahmood has also heard large bombs explode outside the High Court and at the Navy College, both on The Mall road. Yet he insists that there is "a big difference between previous incidents and this one". "Think of Pakistan as a body," he says. "Sometimes the terrorists cut off a finger, sometimes an ear. This time, they've cut off our feet. This is a historic tragedy. They wanted to destroy our very base, our foundation. The Sri Lankan team came after so much difficulty. We begged and begged them to come. India had boycott us. New Zealand were stopped from coming. And what did we do with the trust that the Sri Lankans put in our hands? We broke our promises of security."