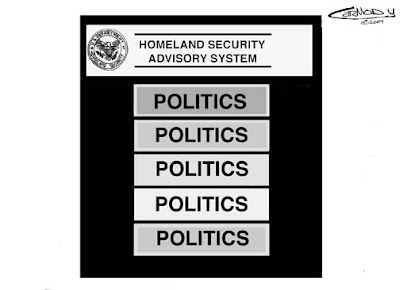 The New York Times reports the hilarious antics of a Californian conman who took advantage of Washington's terror hysteria.

For eight years, government officials turned to Dennis Montgomery, a California computer programmer, for eye-popping technology that he said could catch terrorists. Now, federal officials want nothing to do with him and are going to extraordinary lengths to ensure that his dealings with Washington stay secret.


This chap managed to make a tidy sum out of bogus anti-terrorism software.

... Mr. Montgomery and his associates received more than $20 million in government contracts by claiming that software he had developed could help stop Al Qaeda’s next attack on the United States. But the technology appears to have been a hoax, and a series of government agencies, including the Central Intelligence Agency and the Air Force, repeatedly missed the warning signs, the records and interviews show.


The implementation of this software had some interesting outcomes.

The software he patented — which he claimed, among other things, could find terrorist plots hidden in broadcasts of the Arab network Al Jazeera; identify terrorists from Predator drone videos; and detect noise from hostile submarines — prompted an international false alarm that led President George W. Bush to order airliners to turn around over the Atlantic Ocean in 2003.


The software led to dead ends in connection with a 2006 terrorism plot in Britain. And they were used by counterterrorism officials to respond to a bogus Somali terrorism plot on the day of President Obama’s inauguration, according to previously undisclosed documents.


Did anyone notice the fraud?

C.I.A. officials, though, came to believe that Mr. Montgomery’s technology was fake in 2003, but their conclusions apparently were not relayed to the military’s Special Operations Command, which had contracted with his firm. In 2006, F.B.I. investigators were told by co-workers of Mr. Montgomery that he had repeatedly doctored test results at presentations for government officials. But Mr. Montgomery still landed more business.


In 2009, the Air Force approved a $3 million deal for his technology, even though a contracting officer acknowledged that other agencies were skeptical about the software, according to e-mails obtained by The New York Times.

Of course, who could suspect that such an upstanding gentleman would engage in such a huge fraud.

Mr. Montgomery described himself a few years ago in a sworn court statement as a patriotic scientist who gave the government his software “to stop terrorist attacks and save American lives.”