In praise of Diesel fuel 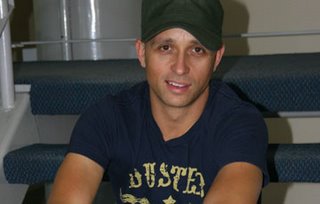 And now for something completely different and apolitical.

Last night, I joined with my friend GG and her neighbour to see a truly awesome and inspiring performance by one of Australia’s blues supremos.

We saw Diesel. Accompanied by strings. It was tasteful. It was classy. And it cost only $25 at the Revesby Workers Club.

Apart from the 4 or 5 strings, Diesel had a bass player (who doubled as a keyboard player) and a drummer with bongos and other goodies.

Sometimes the strings replaced the electric guitar solo. At other times, they added drama to Diesel’s pain-filled voice.

Diesel performed all his hits. I lost track of exactly how many there were! His rendition of Cry In Shame had no drums, with the beat created by his masterful use of his guitar. The saxophone was replaced by the 5 strings being played behind him.

But the highlight of the night was when he did perhaps his biggest hit – Don’t Need Love – as a solo accompanied just by his guitar, with no drummer or bass in sight. Diesel’s voice sent shivers down the 500 or so spines gathered in the Whitlam Theatre.

The concert ran for a full 2.5 hours. There was no minor act. The crowd were mesmerised. So was I.

When they weren’t playing, the strings were clearly in awe of their musical maestro. Yet Diesel was no arrogant conductor, frequently joking with his bass player and repeatedly introducing various members of his band. Musical selflessness at its best.

The final piece was what seemed like a completely impromptu 20 minute jam session of one of his hits. The music was so phenomenal that I simply cannot remember the name of the song played.

What made this concert so memorable was how comfortable everyone felt. We weren’t a packed crowd standing at the rear of a crowded hall. Instead, we had some 30 tables with 10 seats at each table. The seating arrangement made each member of the audience feel like they had equal access to the stars on stage.

And given that Diesel’s music is written for hopeless romantics as well as for headbangers, this intimate arrangement was perfect.

So if you have $25 and earlobes to spare, make sure you catch this amazing and awesome musical experience.