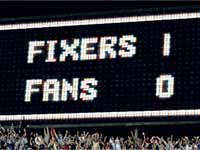 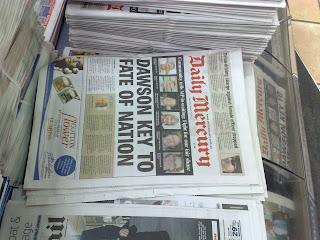 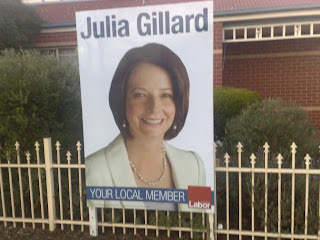 Politics in the central Queensland mining town of Mackay isn’t a game for wusses. Or women for that matter. Which might explain why not a single female candidate showed up to the Dawson "Great Debate" last night at the Mackay Entertainment & Convention Centre. It’s not that chick candidates wouldn’t have been interested. It’s just that there were no sheilas running this time around.

Unlike the LNP candidate George Christenson, few conservative women I know would be stupid enough to spend their university days writing stuff that single-handedly offends Jews, women and gays.

When asked about the remarks published in The Student Advocate in 1998, Christensen said sorry to everyone for his "pretty stupid and quite frankly offensive" comments he made "when I was a teenager" and emphasised how he had never believed his mum was stupid. One prominent academic, Heather Nancarrow from nearby Central Queensland University, told Christensen she had asked each party for their policies on reducing violence against women and children. She’d received stuff from all other parties present (Greens, ALP and Family First) but not from the LNP. Christensen replied words to the effect of "I’ll get it to you before the election. It’s been a busy week".

On the other hand, how many left-of-centre women would you know who, like ALP candidate Mike Brunker, would end up in a fight with the president of a local turf club and be facing criminal charges a week out of the election? Brunker denied it all and told us about how he’d "copped it on the nose" from the said Cyril Vains (himself an ALP member) and merely defended himself. The editor of the Daily Mercury, who was chairing the debate, noted that the defence involved Vains receiving cuts to his eye and a bruised face. Brunker responded that he had lots of witnesses including a minister of religion. At this point, one lady screamed out: "Good on ya Mike. We still love ya!".

Apart from this heckler, there were very few sheilas in the audience. Or indeed blokes. The hall must have had a capacity of about 1500. Hardly a fifth of that number showed up. Among the no-shows was a candidate from the Citizens Electoral Councils. I doubt he’d have been missed.

The Greens chap Jonathan Dykuj began his presentation by acknowledging the traditional owners of the area. This caused a tiny ripple of applause up the front and a much larger groan around the rest of the hall. Perhaps Christensen should have just focused on the blacks and left the sheilas and poofters alone.

Speaking of the backwardness of black fellas, some bloke representing the local branch of a forestry lobby group got up and lectured us all on the evils of world heritage listing before reminding us of how "white man had discovered the value of our forests". No one took him seriously except Christensen, who reminded us that people should be able to chop down trees on their property.

Christensen also kept going on and on about the mining tax, which was killing local businesses and sucking millions of dollars out of the local economy each week. "Talk to the mining contractors and ask them about how they are suffering." Then one bloke stood up and declared: "I’m a mining contractor and my business is going gangbusters. Which mining industry are you talking about?"

Some bloke surnamed Kelly lambasted the ALP over its broadband plans in Tasmania and then asked Christensen a dorothy dixer about the LNP’s NBN proposal. Christensen then lambasted the ALP’s proposal as being based on outdated technology like optic fibres. He must have been a little perturbed to see on Lateline Tony Smith says that the Coalition’s plan is built upon the same outdated technology. And the questioner, Mr Kelly, wouldn’t have been happy to be identified by the Greens candidate as being the husband of former National Party MP De-Anne Kelly

The only sombre moment was when one brave woman stood and said she was a consumer of mental health services. She wanted to know what each party was doing to attract mental health service providers to the area. On this issue, the candidates decided to stop verbally punching each other and address the issues.

As I walked out with the crowd, I could see some Convention Centre staff looking rather desperate to get home. "Full house?" I asked one. They sniggered and responded: "Should have advertised it as a mass debate."