CRIKEY: Pakistan school massacre and the nature of terrorism

At funerals for the dead students kill Pakistan, mourners will recite the same words uttered by the terrorists. And yet some would have us believe Islam has something to answer for.

In his column yesterday, Chris Kenny lectured us on how “sections of the media and political class” are pressuring him and his colleagues to “play down the Islamist element” in various terror attacks affecting Australians. These forces would have us ignore the “horror of Islamic extremist terrorism”.
Kenny wrote of 9/11, when “10 of our nationals were killed”, then of the Bali bombings, when “88 of our citizens” were among the victims, then of the attack on our embassy in Jakarta. We are facing this. We are the victims. And all the left-wing elites care about is “a backlash” and of “repercussions against Muslims” that will never arrive. Kenny’s simplistic binary seems to be “we” Aussie versus them … um … er … Islamic Islamist types.
There wasn’t much evidence of playing down anything from Chris Uhlmann during his conversation with the PM this morning. Uhlmann asked some tough questions that needed answering, then made the extraordinary claim about a certain set of religious and legal denominations and traditions whose adherents make up one-quarter of humanity: “[T]his is a religion that is resistant to scrutiny or criticism, that is utterly incapable of laughing at itself, and when it is criticised the reaction often tends to be violent.”
Blaming this attack on Islam won’t help survivors of the hostage drama any more than an attack on Christianity would help victims of child sexual assault who gave evidence at the royal commission.
Right now people are in mourning. The Lindt Cafe is a popular destination, situated between the financial and legal districts of Sydney CBD. I’ve been shouted coffee there myself by barristers grateful for the work. It could have been me among those hostages. It could have been the mufti wearing a suit. It was almost Chris Kenny.
Of course, real terrorists who are part of real terrorist groups tend not to care much about having the right flag or talking to the prime minister or other delusional wishes. Real terrorists like the Tehrik-i-Taliban Pakistan (TTP) don’t allow the age or gender or religion of their victims to stop them from walking into a school and starting to shoot. 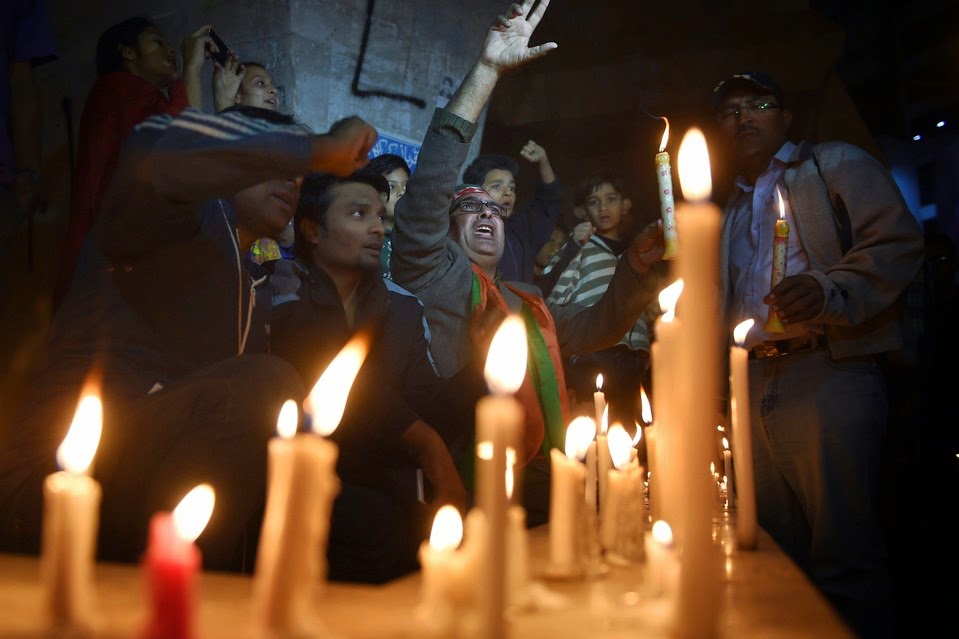 Imagine being a year 10 student and witnessing 40 of your fellow students being murdered during an exam. Imagine being shot in both legs and then shoving a tie down your throat so that you don’t scream in agony and you can successfully play dead. Imagine being a parent and not knowing whether your children will still be in their school uniforms or draped in a burial shroud.
The idea that many terrorists are inspired by theocratic “Islamist” ideas is a given. Pakistani newspapers and Urdu cable TV channels are vociferous in their condemnation of dehshat gardi (terrorism). The current government of Prime Minister Nawaz Sharif may have won the argument about peace talks with the Taliban, but Pakistan looks like it is fast losing the war.
Now here’s a thought. At the funerals of the young students, people will be reciting the Arabic sentence hung up in the window of the Lindt coffee shop in Martin Place. They will recite Allahu Akbar (God is Greater) as was shouted by Taliban assailants as the bullets entered the victims. With whom do the mourners of Peshawar have more in common? The self-styled Sheikh Haron? The Taliban murderers? Or the Sydney folk of all colours and ethnicities and faiths laying flowers and praying at Martin Place?