INDIA: Silence Over Suffering Is Deafening

We often read stories of India's economic miracle, its IT revolution and its Bollywood culture. We're keen to do business with India, and Indian migrants are regarded as highly skilled and hard-working.

Australia is even considering selling uranium to India, presuming its status as the world's biggest democracy makes its nuclear programme less dangerous than that of Iran or Pakistan.

But what about human rights? We so often implement double standards when determining how human rights might affect our international relations.

The experiences of India's religious minorities have generally been ignored by Western Governments and commentators.

Gandhi's vision was of a truly civilised and democratic India which zealously protected its minorities. He fought not only the British Raj but also communal extremists who incited bloodshed between religious communities. His assassination occurred at the hands of extremists of his own Hindu faith. In recent decades, these forces have re-emerged in mainstream Indian politics.

The spirit of Gandhi's assassins was present in the various social, educational and political organisations linked to the Bharatiya Janata Party (BJP), which ruled India federally from 1998 until 2004 and which continues to be the ruling party in various Indian state legislatures. In 2002, BJP activists in Gandhi's home state of Gujrat systematically murdered at least 2000 Muslim (and some Christian) civilians and made 150,000 homeless.

Christians in Pakistan are often victims of discrimination, some even prosecuted under Pakistan's selective implementation of religious-based laws. In recent times, there has been much discussion of the precarious position faced by Christians in Muslim-majority states such as Malaysia, Iraq and the Palestinian territories.

These are all crucial human rights issues about which people of all faiths, especially Muslim minorities, need to agitate.

Unfortunately, minority rights have become an issue of double standards. We rarely hear local Muslim religious bodies and lobbies talking about the plight of non-Muslim minorities in Muslim-majority states. Few Muslim religious leaders have taken the example of imams like South Africa's Farid Esack, who has agitated against the mistreatment of Pakistan's Christian communities.

Imagine a situation where members of an established indigenous Christian community in Malaysia are wrongly accused of murdering the leader of a Muslim chauvinist group. They are hunted down by Muslim thugs, their homes and villages firebombed. 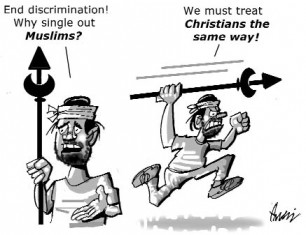 The situation becomes so tenuous Christian leaders announce they might even form their own militia if the Government refuses to provide effective protection. This situation is happening, though not in Malaysia and not at the hands of Muslims. In India, activists of the Vishwa Hindu Parishad (VHP), a movement that forms part of the BJP opposition, have terrorised Indian Catholic communities and institutions.

The VHP regards Catholicism as a foreign faith, despite its presence in India for at least a millennium. Catholic welfare groups are accused of pressuring lower-caste Hindus to convert to Christianity. Most Catholics are either former Dalits (untouchables) or from indigenous tribal groups.

On August 23, a senior VHP leader was murdered in the eastern state of Orissa. Maoist rebels claimed responsibility for the murder, accusing the VHP leader of having Nazi sympathies. But VHP leaders blamed Catholics. More than 40 churches and 11 other Christian institutions (including those linked to the order of the late Mother Teresa) were destroyed by VHP supporters. One female missionary was burned alive and dozens of other Christians murdered.

Yet the silence among otherwise vocal Christian activists about the suffering of India's Christian communities is deafening. Even politicians claiming to champion our Judeo-Christian heritage are silent.

There are 18 million Catholics in India, more than in Canada and England combined. Yet as Father Raymond de Souza lamented in a recent article for Canada's National Post, anti-Christian violence by VHP and BJP extremists cannot be checked if it is not even noticed.

As if to underscore his remarks, The Australian newspaper reported on September 16 that violence has spread to Karnataka, with some 14 churches destroyed.