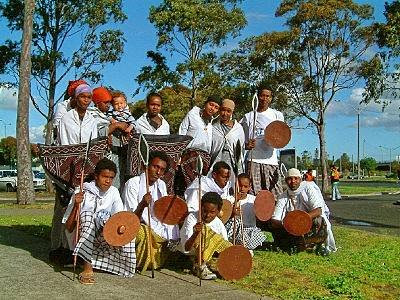 The Daily Telegraph may see fit to publish racist comments about persons of Somali heritage. However, its fellow News Limited paper The Australian has published a more nuanced feature piece on Melbournites of Somali heritage in its Weekend Magazine.

A large number of Somalis migrated to Australia as refugees. Many have witnessed horrific violence in their home country, which has been locked in a vicious civil war since 1991. I cannot even begin to imagine what impact these experiences must have on Somali migrants today. Perhaps the best way to appreciate this is to cite passages from the March 23 story, authored by Drew Warne-Smith and titled New home, new hope:


Jama came to Australia in 1996, aged 12, with his mother, four brothers and three sisters. Like so many Somalis, his family had fled the capital, Mogadishu, after the civil war erupted in 1991. He remembers sitting on the crowded roof of a truck as it drove south towards Kenya, dead bodies littering the side of the road.

They were five years in a refugee camp in Kenya, awaiting asylum; a camp where rape and theft were commonplace and school comprised 50 kids in a room with one adult. His father was killed by Kenyan soldiers near the Somali border in 1993. He doesn’t know how or why.

Landing in Australia, a place his friends at the camp had teased him was “the last place on Earth”, Jama felt disarmed. Literally. No one was holding a gun. And no one looked scared, either. People seemed free to do anything and say anything, not that he could understand them.

Less than a year later, after studying English for six months at a language centre, he was sent to high school in Brunswick, placed in Year 7 according to his age. He could barely understand the teacher, let alone learn or contribute. Embarrassed, resentful, he began wagging days.

Soon he was hanging out with other African kids doing the same. Ignoring his mother’s pleas, he dropped out altogether in Year 9, then returned to school but never got as far as Year 11. He didn’t attend the mosque either, nor say his prayers. And he began drinking alcohol, a taboo in Islamic culture.

Then came the nightclubs and the fights. Stealing. Run-ins with police. A 5cm scar over his right eyebrow tells of being glassed in a brawl at a club in Ringwood. But Jama wasn’t scared of anyone, not here in Australia. Not after what he’d seen in Africa. He had no father, no discipline, no moral compass, and not much hope either. He had cut loose from his own culture and he had little hope of embracing a new one. Within Melbourne’s Somali community, Ahmed Jama became known as one of the Lost Ones ...


Some may say that Jama is an exception. After all, don't these boys all have fathers who can teach them good manners? The answer can be found in this frightening statistic.


About a quarter of all Somalis in Victoria – about 4000 – live in a family without a father, according to research by the Somali Australian Council of Victoria.

“The fathers are dead, or fighting, or they left Australia to return to Somalia, or they work overseas. And there is a tendency for teenagers in those families to become lost,” Ibrahim says.


But that's just one story. What about all the other Somali families? Meet Abdulle Hussein, a former lieutenant-colonel in the Somali Army.


He and Shukri had three children under four years old when they fled the Baidoa region, northwest of Mogadishu, in 1991. For three days and three nights they walked without stopping, until they reached Ethiopia about 140km away. Soon after, their youngest son died from illness in the suffocating heat. They buried him and kept walking. Six months and 4000km later they wandered into a refugee camp in Kenya, where they waited two years until being accepted into Australia.

Hussein glances at his 15-year-old son Said, sitting quietly in the corner. “They have no idea what it took to come here,” he says, without any trace of sadness or bitterness. Such hardship is unremarkable among those who came here.

Another family, I’m told, lost two sons escaping Somalia. A militia group kidnapped the eldest – being old enough to carry a gun – and they never saw him again. A crocodile killed the second as they crossed a river by night. The father still draws pictures of his boys to stop the memory of what they looked like from slipping away.

Really, who can imagine such grief, let along endure it? These experiences beggar belief. Fleeing a civil war only to be eaten by a crocodile. A stolen son, probably fighting for those who tried to kill his parents, most likely dead himself. Relatives already killed by bullets and knives. Burying a baby on a roadside.

I will also learn of Hussein Mumin, a Somali turned street kid, who saw his father and brother murdered, having already lost his mum. Rejected by a devout community unable to cope with how far he had strayed, he would be killed too – stabbed to death in a domestic argument. And as Barbara Chapman, his social worker and friend, tells me – when these refugees arrive, there are no government services to screen or treat them for their trauma. Yet we act surprised when they drop out of school, or pull a knife, or clash with police, or retreat to their own culture. The surprise, she says, is that they function at all.


Who can imagine, let alone endure, such grief? And we can hear so many other stories from those desperately risking their lives to reach our safer shores. Should we resent them for their efforts? Should we demonise them?