BLOGS: More good taste from Tim Blair and his buddies ... 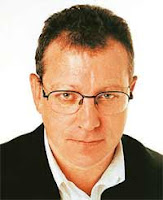 Each Saturday, the Daily Telegraph devotes an entire page to the slightly amusing rant of its opinion editor, Tim Blair.

Why they hired Tim, I will never know. Perhaps the Tele enjoy drinking the dregs of the Bulletin's beer. Or maybe they enjoy consuming the fish that ACP Publishing rejects?

At the bottom of Blair's column, you will find words inviting Tele readers to join the discussion at his blog. And what interesting discussion it is. Such intelligent conversation. Such sober reflection on the issues. And absolutely free of personal attacks and innuendo. Here's a sample of comments from a recent posting ...

Irfan is at the least two-faced. Dishonest is a good description of him. He has also shown himself to be a thug.

As I’ve written before, ugly inside and out
and occasionally the veneer slips and we see that ugliness inside.

Irfan is a fat Pakistani pancake. It is strange that for a lawyer he always threatens to sue one if they make a criticism about him. I am no lawyer but one thinks his behaviour is comparable to that of a ten year old bully in the playground threatening to punch you if you say something about him.
Posted by genius on 2007 11 22 at 05:06 PM • permalink

Irfan Yusuf has been fairly accused of
thuggery and deception.

I would encourage readers to ... learn
more about Irfan’s true colours. These will give valuable insight into why Tim
wouldn’t give him the time of day (hence why Irfan so resents Tim).

I know he’s reading this, and he knows full-well what he’s done, but Irfan Yusuf is too antisocial and intellectually dishonest do say or do anything about it other than create sockpuppets and lie, all the while encouraging menace against people he’s never met.
Posted by Dan Lewis on 2007 11 22 at 06:02 PM • permalink

This surely is the level of discussion David Penberthy and Roger Coombs would like to see their newspaper associated with. Or is it? Do they know this stuff is being written and moderated on blogs of a newspaper they edit?

And what part of shut the fuck up, you stupid fucking bint, apologise and then fuck off from whence you came, doesn’t this sun damaged harridan understand?
Posted by Infidel Tiger on 2007 11 21 at 09:14 PM • permalink

Charming. Interestingly enough, neither Blair nor his commenters actually disagree with the text of the leaflet. Their only concern is that it was an act of political stupidity. And given their virulent hatred to anything and everything linked to Islam, why would Blair and his cohorts attack the fake brochure's contents? As one commenter puts it ...

Incredibly idiotic, however a fair amount of the content of the leaflet is accurate, and the Liberal party is too limp-dicked to say so. The ALP totally fucked SW Sydney by filling it with tribal primitives from the Levant, and have benefitted with safe seats at great cost to the rest of the country. Grassby et al should have their kidneys ripped out and set on fire.
Posted by Habib on 2007 11 21 at 09:31 PM • permalink

If they had any brains and wanted to turn this idiocy to their advantage, they should publish the leaflet with a “fake but true” disclaimer and wedge Labor over Islam/multiculturalism. Unfortunately they don’t have the ‘nads, ditto over “climate change”; Howard at the NPC played fottsie with the assembled true believer journos when questioned over this issue, rather than saying what he obviously believes- that the whole thing is bollocks, and we aren’t going to waste a razoo on a fantasy- while the rest of the world is pissing money up a rope on unworkable solutions to a non-existant problem, we’re going to keep on digging up coal and pumping oil, and will eventually buy the rest of the planet (or at least the tasty bits, the Sand Goblins can have France).
Posted by Habib on 2007 11 21 at 11:11 PM • permalink

All of these commenters reflect the same opinion which is clearly also shared by Blair himself i.e. that the contents of the pamphlet were true even if the pamphlet itself was a fake.

Now some of you might be wondering what sorts of people Blair allows on his blog. And what sorts of comments he moderates. At least one of his regulars really is a full-blown white-supremacist ...

The leaflet does contain many elements of truth, particularly when it refers to Keating (and be extension “leaping” Leo Mcleay) overriding advice and arranging for Sheik shit-for-brains to stay in Australia for cheap electoral gain. As an aside, I received this mysterious letter in October, it was unsigned with no sender details.
Posted by darrinhV2 on 2007 11 21 at 11:18 PM • permalink

DarrinV2 is none other than neo-Nazi Darrin Hodges of the self-styled one-man-band called the Anglo-Australian National Community Council.

But of course, it isn't just Blair's neo-Nazi friends who engage in this kind of pleasant banter. Blair himself is known to use his blog to address the issue, not the man.

Irfan arrived in Australia about 38 years and 120 kilograms ago ...

Here's some free legal advice to Nationwide News. You might have over 100 employees. But you can still sack Blair. Surely his behaviour constitutes sufficient misconduct to enable you to dismiss him without notice. Alternatively, surely his imbecilic commentary reflects on your paper and therefore could be used as an operational basis for dismissing him.

He's a liability. Get rid of him before he costs you hundreds of thousands of dollars in unnecessary legal fees.

CRIKEY: Not the first time ALP candidates have been "smeared" with Islam

If there’s one person who won’t be surprised at senior Liberal Party figures being caught red-handed distributing allegedly Islamic material in a marginal Western Sydney seat, it is former ALP candidate for Greenway Ed Husic.

The nominally Bosnian Muslim background of this Australian-born ALP staffer was used as a wedge by various people on the conservative side. In a speech to the Sydney Institute on 19 October, 2005 (the full text of which can be read here), Husic told his audience of this experience:

Just before election-day, I learned about the distribution of another pamphlet, this one claiming that I was a devout Muslim fighting for a better deal for Islam in Greenway.

The sheet was a dummied version of one of my campaign ads, designed to mislead a reader into believing it was put out by me.

I was also told there was a phone banking campaign that repeatedly rang voters with identified strong religious beliefs to let them know that I was Muslim ...

These events just reaffirmed in my mind a thought that had travelled with me through the campaign – the way that continual, sometimes supposedly neutral, references to religion were conveniently helping to underscore what people believed to be my big negative.

The Daily Telegraph described the pamphlet as

... clumsily worded and ended with 'Ala Akba', a dismal attempt at the traditional Islamic salute of 'God is Great' - 'Allah Akbar'.

Perhaps pamphlet authors had taken Arabic lessons from Tele columnist Piers Akerman, who himself has used similarly clumsy wording in the past.

This incident shows just how marginalised Muslims have become in Australia. Both major parties happily court fringe Christian groups, yet neither party answered the survey of one (albeit tiny) Muslim political action group. In the popular mindset, building mosques and suicide terrorist attacks are all linked.

[On] election-day, I heard voters being told they should support my opponent because she is a "good Christian". Obviously there was a big, organised effort to keep this issue alive. Was Ed a real dinkum Aussie? Could he be relied on? Would he be fighting for you or for Islam?

First published in the Crikey! daily alert for Thursday 23 November 2007.