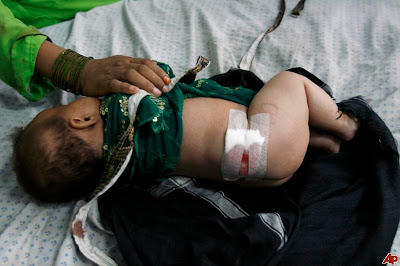 Australia's Immigration Minister has unilaterally announced that the situation in Afghanistan is changing for the better. Wonderful. No doubt his staff would have checked news reports and found the following signs of peace and harmony ...

[01] The situation on the ground has certainly improved. Five Afghan civilians were killed by a roadside bomb today. Some 13 were injured.

[02] Canada has announced that its forces will stay in Afghanistan beyond 2011. Here's what the Ottawa Citizen reported:

Defence Minister Peter MacKay warned Canada’s NATO allies Friday the military alliance cannot take its “foot off the gas” in Afghanistan, simply because the United States is about to send 17,000 more troops to the country.

[04] Relations between the United States and Afghan President Hamid Karzai are at an all-time low.

[05] Democracy is working so well that the Parliament has had to issue ultimatum to Karzai to fill 11 Cabinet posts within 10 days.

[06] The Taliban is so much on the run that even Hamid Karzai wants to join them.

[07] Far from fighting drugs, the Afghan President might be too busy using them himself! Here's what a former deputy UN envoy to Kabul, Peter Galbraith, has to say:

He's prone to tirades, he can be very emotional, act impulsively," Mr Galbraith said. "In fact some of the palace insiders say that he has a certain fondness for some of Afghanistan's most profitable exports.


Yep, this is a country fast changing for the better. Hence we have every reason to bring our troops home. Speaking of troops ... 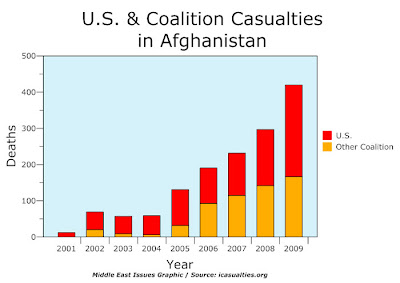