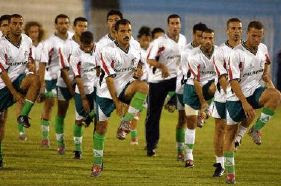 While Israelis look set to elect the anti-peace Likud Party, the Palestinians will be cheering their national football (i.e. soccer, for all you NRL/AFL/Rugby freaks) team which played its first game on home soil on Sunday. Previously its fixtures have all been played in one of the Gulf States.

The friendly game is against Jordan, whose population is majority Palestinian, meaning people on both sides will likely be supporting the same team. Ironically, Palestine coach Izzat Hamza is Jordanian.

The Jordanians arrived over the weekend in ar-Ram, just outside Jerusalem, to play at the newly-built Faisal Husseini Stadium that seats some 6,000 people and whose pitch is made from waterlogged synthetic grass. Its construction was financed by France, Saudi Arabia and Gulf states as part of FIFA’s GOAL program which assists the national teams of impoverished and soccer-crazy countries. Other beneficiaries have included the Central Asian republics of Kazakhstan, Kyrgyzstan, Uzbekistan, Tajikistan and Turkmenistan (collectively known as Futbolistan).

Palestine is ranked 180th in the world. Still, that didn’t stop FIFA head Sepp Blatter from cutting the ribbon and sticking around to watch the game. Palestine was defeated by China in its last game by 3 goals to 1, and hence didn’t qualify for the 2010 South Africa World Cup. Neighbour Israel is still in its qualification stage.

Palestine was given nation status by FIFA in 1996. The old Palestine Football Asociation, formed in 1928, consisted almost exclusively of Jewish players and was predecessor to the Israeli FA. Although the modern PFA represents teams and players from both the West Bank and Gaza, the Gazans cannot take part in the Palestinian competition due to a stricter Israeli blockade which has been in place since forces close to HAMAS seized control of Gaza from the forces loyal to Palestinian President Mahmoud Abbas.

Palestine’s official competition has felt the brunt of the Israeli occupation. Previous club games have been affected by the opening and closing of Israeli checkpoints, with players and supporters stranded. The friendly game against Jordan was no exception, with the stadium close to the so-called barrier that separates Israel and parts of the West Bank from other parts of the West Bank. Hopefully, the game will have served as a nice diversion. As Palestine’s team captain Rami Rabi told The Guardian: “Whatever happens, we intend to give the fans two hours of happiness to forget about their problems”.

And who won the match? Well, it was a draw. Still, the Palestinians did score the first goal. What an electric moment that must have been for the entire nation.