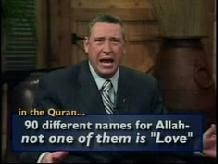 John McCain isn’t the most conservative person in the Republican Party. Unlike many of his colleagues, McCain doesn’t always play the role of cultural warrior.

But back in late February, McCain needed the support of one conservative pastor to beat a presidential rival, another conservative pastor named Mike Huckabee. The man who helped McCain on that occasion in the Ohio primary was one televangelist, Rev Rod Parsley of the World Harvest Church of Columbus.

McCain on that occasion described Parsley as his spiritual guide, while Parsley described McCain as “a strong, true, consistent conservative”.

The leader of a 12,000-member megachurch, Mr Parsley has written several books detailing his fundamentalist views, including the 2005 Silent No More. In this contentious work, Mr Parsley castigates homosexuals, abortionists, the entertainment industry and civil libertarians before turning his attention to the perceived threat to the United States from Muslims.

In a chapter titled "Islam: The Deception of Allah," Mr Parsley speaks of Allah as a “demon spirit” and urges "war between Islam and Christian civilisation". There is no difference between violent Islamist extremists and moderate Muslims, he argues.

“I cannot tell you how important it is that we understand the true nature of Islam, that we see it for what it really is,” he writes. “In fact, I will tell you this: I do not believe our country can truly fulfill its divine purpose until we understand our historical conflict with Islam.

“I know that this statement sounds extreme, but I do not shrink from its implications. The fact is that America was founded, in part, with the intention of seeing this false religion destroyed, and I believe September 11, 2001, was a generational call to arms that we can no longer ignore.”

It is not the first time that Mr McCain’s desperation to win over the religious right has landed him in trouble. The Republican had already angered Catholics by cosying up to John Hagee, the leader of an evangelical Texas megachurch who has described the Roman Catholic Church as “the great whore” and a “false cult system”.

However the row did not prevent Mr McCain from storming to victory in all four March 4 primaries and laying claim to the party nomination.

Mr McCain had already been forced to dissociate himself from one speaker at the rally, a conservative talk radio host who repeatedly stressed Mr Obama's middle name "Hussein" as he introduced the Republican candidate.

Click here for further information on how Parsley has been the subject of a number of lawsuits over his secretive fundraising practices and the manner in which is church is governed.

How does that advert go again? Ah McCain …