I never realised just how much ordinary Indonesians hated the Bali bombers until I actually went there. It was January 2006, and I was on an exchange program organised by the Australia-Indonesia Institute. Before going, the AII gave is a briefing about Indonesia, its history, politics and its unique approach to religiosity. Indonesians are gentle, polite and quiet-spoken people.

Our delegation was further briefed in Jakarta by an awesome professional at the Embassy. We were advised to tome down our Aussie-style polemic. Apart from the odd dingo cartoon, Indonesians rarely engage in blunt or deliberately controversial discourse, let alone the sort of crass moronic ad hominem nonsense we've become accustomed to in this country.

During our trip, we were exposed to every kind of Indonesian Islam you could imagine -- from firebrand charismatic Salafis to ecumenical interfaith activists of Interfidei to youth reps of Muhammadiyah and Nahdhatul Ulama (Indonesia’s largest Islamic organisations) to students at a traditional pesantren (the kind of religious boarding school Barack Obama never attended outside Jakarta.

At the Gadjah Mada University in Jogjakarta, I met a Balinese postgrad doing his thesis on the impact of the Bali bombings on the economy of not just Bali but also nearby islands and even eastern and central Java, the island that forms Indonesia’s economic and cultural powerhouse. A year later in Sydney, I met another Balinese chap in Australia visiting on an AII exchange program. Both told me about how their families and communities had suffered thanks to the terrorist attacks in Bali, not to mention how so many locals as well as foreigners were killed and wounded.

(This fellow requested me to take him to Cronulla Beach. I assumed it was to see the scene of the 2005 race riots. It was only when I saw him reciting traditional Muslim prayers reserved for one’s deceased relatives at the memorial for Bali victims that I realised why he really wanted to be there.)

Mentioning Amrozi and other Bali bombers exhibits the kind of uncharacteristically brutal response I was told Indonesians only rarely exhibit. If more Australians understood just how unpopular the Bali bombers are in their own country and just how many ordinary Indonesians’ livelihoods have been destroyed, we would understand exactly why Amrozi smiles so much.

When Indonesians smile or chuckle, it’s often because they are embarrassed or ashamed about something they’ve said or done. Amrozi’s smile, referred to in today’s Age, is more likely one of shame or embarrassment. Notwithstanding his defiant words, Amrozi knows millions of Indonesians are looking forward to his execution. The bombs of Amrozi and Imam Samudra don’t discriminate on the basis of religion, even if their sick demented political theology does. 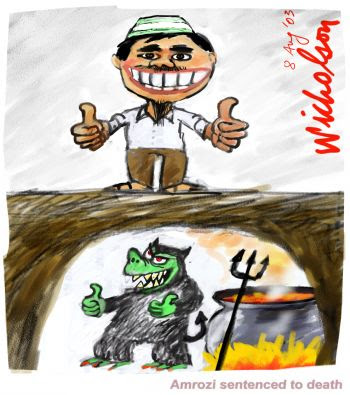 First published in the Crikey daily alert for 2 October 2008.