The polygamy circus continues.
The Herald Sun has added yet another crazy graphic to their story showing two women-in-black taking a stroll: 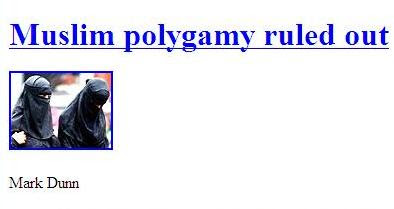 It also had a poll asking readers: "Should Muslims be allowed to have more than one wife?" As at 1:27am, after some 104 votes were cast, 71% answered yes. I reckon it was the work of Turkish soccer fans getting tipsy on arak whilst waiting up to watch the UEFA Cup semi-final. Not to be outdone, the Daily Telegraph added an extra 1.5 completely veiled faces to the graphic accompanying its story.

To its credit, The Australian refused to join this hysterical bandwagon. It published two thoughtful pieces which covered the issues thoroughly and which mentioned that polygamy concerned Mormons as much as Muslims. The issue raised wider concerns about unregistered polygamous relationships, many of which are more a case of infidelity than religiosity. A wide variety of views were canvassed in what was quality journalism. I'd take off my burqa to Natalie O'Brien and Sian Powell, except that I don't wear one.

The Age's piece is also worth reading. The Sydney Morning Herald website, as far as I could see, largely ignored the issue. Fair enough. What's missing from all this is Uncle Sam from Salam Cafe asking Keysar Trad to perform a few on-the-spot polygamous marriages for him.

First published in the Crikey daily alert for Thursday 26 June 2008. 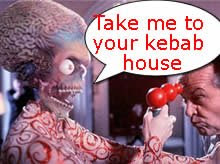 Writing in The Independent on 23 June 2008, columnist Johann Hari tells us what reality TV can teach us about non-Christian faiths. In particular, he sees an increasing secularisation of Islam in Britain.

Reality TV has long shown a face of British
Islam that contrasts with the murderous smirk of the Tube-bomber Mohammed Sidiq
Khan. It gave us Chico Slimani, the buff, rippling ex-Chippendale who blagged
his way through The X-Factor; Kemal Shahin, the smart, tart young gay man who
dominated Big Brother 5; and Saira Khan, the feminist entrepreneur from The
Apprentice who refuses to let her religion be hijacked by "bearded old men from
the Middle East". They represent the first fragile shoots of a secularised Islam
that – like most Christianity and Judaism in Europe – can be shrunk until it is
a matter of custom and private conscience.

Hari makes the distinction between secularists and fundamentalists. His definitions aren't extremely precise, but then precision isn't the easiest thing to locate in religion.
Anyway, what happens when a so-called fundamentalist teams up with another Muslim we;d expect to be a fundamentalist? The results can be quite the opposite of what you'd expect. I'll let Hari do the typing ...

But on our reality TV shows, this has always
been a one-sided fight. Fundamentalists, by their you're-all-damned nature, are
not inclined to take part in reality TV. Until now.

If you were told the biographies of Big
Brother contestants Mohamed Mohamed and Alex De-Gale, you wouldn't find it
hard to guess which one is the fundamentalist. Mohamed was born in Somalia in
1985. When he was five years old, he saw his mother being held at gunpoint, and
thought she was going to die. Since then, he has spent most of his life fleeing
from one civil war to another – until, finally, he was granted asylum in
Britain. De-Gale was born in the same year in south London, to black British
parents. She is now a lithe accounts executive with high cheekbones, short
skirts, a BMW, and a seven-year old daughter she brings up on her
own.

You guessed wrong. They wouldn't use these
terms, but Mohamed became a convinced secularist on the run from Somalia, while
Alex learned a Wahhabbi interpretation of Islam on the streets of Tottenham.
This emerged, as everything does on Big Brother, through a thicket of
trivia. Mohamed's birthday fell a week into his stay in the Big Brother house,
so the producers threw him a party, and let him pick the theme. Remembering a
fun night he'd had at university, he said he wanted the male housemates to dress
as women, and vice versa. Everyone cheered and howled for
alcohol.

Except Alex. "First and foremost," she said,
"I am a Muslim." And that meant the idea of a man dressing as a woman "made me
feel sick". Jabbing her finger and shouting, she said to Mohamed: "Tell it
to Allah [that] it's all in the name of fun. It's bad enough that we drink and
smoke ... You're supposed to be a Muslim man, someone I can look up to for
guidance. You will have my friends and family in uproar. I am disgraced by you
... 85 per cent of the people I know are Muslims. And trust me – the sheer
horror they would have experienced ... [You have] disgraced
Islam."

"You can't tell me I'm a bad Muslim," Mohamed
replied. "I am old enough to be responsible for myself. Don't bring religion
into it!" She snapped back: "It is! There's nothing else!" Alex was so enraged
she announced she has "gangster friends" and, if she was evicted, "I get to go
out [and] see everyone's friends, I get to see their family. I get to do the
shit that I wanna do. Pow, pow, pow." This threat wasn't necessarily idle: Alex
has a restraining order against her after she waged a "hate campaign" against a
former friend.

In that little exchange, you see the contrast
between two understandings of Islam. I live in the middle of the Muslim East
End, and I see this raw, rubbing conflict being played out every
day.

Alex believes that Islam offers Absolute
Judgements, immutably cast in stone in the Koran. These are (of course)
hellishly patriarchal, since they were formulated by illiterate desert merchants
in the seventh century AD. She has been taught there is "nothing else". Later,
she explained to another housemate that Islam forbids drinking and smoking.
"What can you do then?" he asked. "Pray." That's all. If you see somebody acting
in a way your pre-modern system judges to be "sick", is it perfectly moral to
threaten to kill them?

Mohamed, by contrast, sees the religion as
consisting of metaphors and moral guidance – and he thinks it has limits. There
are places it shouldn't go. "She always brings religion into an equation that
religion has nothing to do [with]," he said angrily. But what makes this
argument even more fascinating – turning it from a scene by George Bernard Shaw
into one by David Mamet – is the ambiguities within Alex's character. She howls
about the morals of seventh-century Arabia, when they would have her stoned to
death. Almost every Islamist I have met has this dissonance running through
them. The 9/11 hijackers went to a strip-bar and got drunk before staging their
cry for the construction of a Caliphate that would kill them for doing just
that. The "moral" vision they believe in is so inhuman even they can't follow it ...

So watch that row between Mohamed and Alex
again. It is a shouting match – "This is nothing to do with religion!" "Tell it
to Allah!" – playing out in a million variations in souqs and madrassahs and
Muslim homes across the world. Now that's what I call reality
television.

Perhaps Australian Big Brother could follow suit. Maybe they could have polygamist-wannabe Keysar Trad going head-to-head against lawyer and author Randa Abdel-Fattah. Or former mufti of Lakemba Sheik Hilali up against Unkle Sam. Or yours truly intellectually wrestling feminist author and academic Shakira Hussein.
They can do what they want. I still wouldn't watch Big Brother on Channel 10. Seriously. 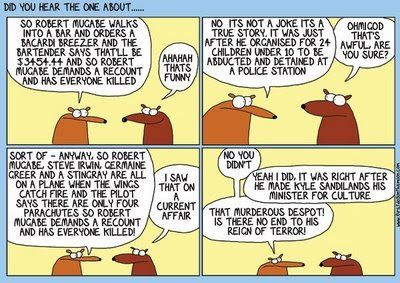