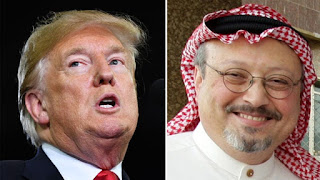 A Saudi dissident journalist who contributes to the Washington Post has apparently been murdered in the Saudi embassy in Ankara, Turkey.

Jamal Ahmed Khashoggi’s body was apparently cut into pieces. Turkish authorities claim to have video of the gruesome murder. US president Donald Trump has promised “severe punishment” if it turns out the Saudi government was responsible.
How do I know this? Because I was watching the news in a pub in Broken Hill. It was one of the first stories on Channel 7 news. No doubt the gruesome nature of the murder will spread the story far and wide, and will ensure that we will all forget certain facts.
Firstly, we will forget that Turkey is no friend of journalists. Last week in Melbourne I saw a documentary screened by a dissident religious group in Turkey (the Gulen movement) which the government blames for the recent coup attempt. The documentary showed how the government of Recep Tayyip Erdogan has created an environment of fear in which more than 180 news outlets have been shut down and at least 120 editors and reporters have been detained or forced to leave the country. Zaman, Turkey’s largest selling newspaper and linked to the Gulen movement, was taken over by the government in March 2016. The Australian edition of Zaman continues to be published.
Donald Trump is also no friend of journalists. In February 2017 he tweeted that some media outlets are enemies of the American people. He has publicly abused journalists and popularised the term “fake news”. He has also championed colourful conspiracy mongers such as Alex Jones.
It’s true that neither Erdogan nor Trump have murdered and dismembered journalists. But Trump’s remarks are perhaps the first time in living memory that a US President has threatened Saudi Arabia with anything resembling punishment. Despite near unanimous agreement by US lawmakers to remove sovereign immunity allowing victims to litigate against the Saudi government, US presidents have sought to place obstacles so as not to risk America’s relationship with its closest Middle East partner after Israel.

That partnership has involved the US providing a ready supply of weapons to enable the Saudis to prosecute a deadly war in Yemen. The deaths of thousands of civilians including children has barely raised a murmur from the White House. 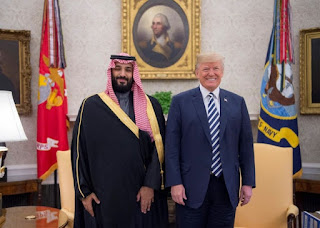 The war in Yemen has been going on since March 2015 and has involved deliberate targeting of civilians through air strikes, bombardments and deprivation of medical and other supplies by aid agencies. Civilian homes, hospitals and schools have been attacked. Some three million people have been displaced from their homes. 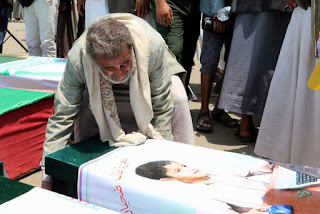 Amnesty International has collated some horrendous figures as well as victim testimonies. One testimony, in particular, I found shocking. It was from a woman who somehow survived an airstrike that killed more 63 civilians:

“[It was like] something out of judgement day. Corpses and heads scattered, engulfed by fire and ashes.”

Such testimony has done little to stop Western countries such as the United States and the UK from selling weapons to Saudi Arabia, even as independent Saudi journalists like Jamal Khashoggi were urging an end to the war.

“The longer this cruel war lasts in Yemen, the more permanent the damage will be. The people of Yemen will be busy fighting poverty, cholera and water scarcity and rebuilding their country. The crown prince must bring an end to the violence and restore the dignity of the birthplace of Islam,” Khashoggi wrote.

Khashoggi would have been disgusted if he’d known his violent death was worth more than the brutal and violent deaths of Yemeni children from bombs, starvation and disease.​