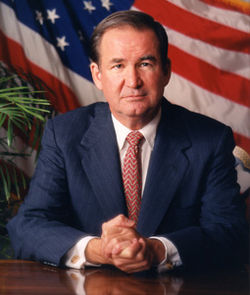 When the Planet Irf blog was first conceived back in 2002, I envisaged that it might represent a return to sensible and cautious small-“c” conservative politics. Over time, the blog has been sidetracked by other national and international issues. Perhaps now is a good time to revisit some of its original theme.

In this sense, many of the old small-“c” conservatives driven out of the NSW Liberal Party by the neo-Con-inspired Religious Right continue to maintain a healthy disrespect for the neo-Cons. But what is the alternative to neo-Conservatism? And do the alternatives really have the answer?

The US is home to two broad conservative traditions. The dominant strand (at least when it comes to wielding real power in Washington) are often known as the neo-Conservatives. The other are a broad group of anti-neo-Cons who claim to be truer to the old Reagan conservatism,.

In this second group are Patrick Buchanan, a former presidential candidate and editor of an interesting publication called The American Conservative.

You can visit the website of the magazine and download a sample copy. The one I downloaded was dated November 3 2003, with a cover story “The New Iran – Khomeini is Dead”.

The magazine makes interesting reading because it shows that American anti-neo-Con politics is not necessarily a bastion of sensible policy either. Patrick Buchanan’s editorial in the magazine is little more than an anti-free market, anti-immigration rant one would expect from certain sectors of the old DLP.

Buchanan’s views on immigration are particularly unsavoury. He talks about a “Third World invasion of America”, claiming that “mass immigration is bankrupting California”. The result is an alleged mass emigration by Californians to other states.

Buchanan’s anti-UN prejudice can be seen in his claims that mass immigration has led to a “radical transformation of America into a giant replica of the UN General Assembly”.

And what does it have in common with the UN? Are UN delegates a group of impoverished Latin Americans looking for work and housing and social security? Or is it just that the UN General Assembly has too many non-Whites?

With this sort of logic (or lack thereof), Buchanan would make an excellent addition to the NSW Young Liberal executive. He certainly has enough resentment toward migrants (unless they are conservative Christians able to stack branches).

But in case you thought Buchanan was just plain weird, think again. Heck, we all have the right to our idiosyncrasies.

Buchanan is an entertaining polemicist. He enjoys using colourful language to make his point. His goal is to generate a response. Which makes him an ideal op-ed writer.

(He certainly generated a response from me in the paragraphs above!)

Buchanan believes that GW Bush has abandoned genuine conservatism for “the Hong Kong values of the Wall Street Journal”. These values include “free trade globalism, open-borders immigration and Wilsonian interventionism.”

Buchanan sees free trade as the root of all industrial evils. He argues that the huge trade deficits the US runs with Canada, Mexico, Japan, China and the EU are “the returns from 10 years of free trade”. GW Bush’s term in office (at least upto 2003) has seen one in six American manufacturing jobs vanish.

Buchanan then commences an all-out assault on the failed US intervention into Iraq in the name of “Regime Change”. He gives “the counterfeit conservatism of the Wall Street Journal” particular short shrift, arguing they have always wanted war with Iraq and just about everyone else in the Middle East (except Israel, of course).

So why does the WSJ engage in such warmongering? Why do conservatives not realise that “the Wall Street Journal is to true conservatism what Eisner is to Disney, a cow bird that flew in to sit on the nest another bird built”?

Buchanan believes that the WSJ has a distinctly internationalist agenda, and wants to see “[w]orld money, with a world central bank”. And who would rule the roost over this international political and economic order? Why none else than the nation that seems to owe everyone else lots and lost of money of course!

I can’t help but think that old-style American conservatism suffers from a certain myopia. All the good sense and logic in foreign affairs is underpinned by a Yankee-centric view of the world. Yes, it is true that it is stupid for any man to go raiding other people’s homes when the beds in his own home are burning or sinking or even drowning. But rejection of all that is foreign doesn’t seem very sensible either.