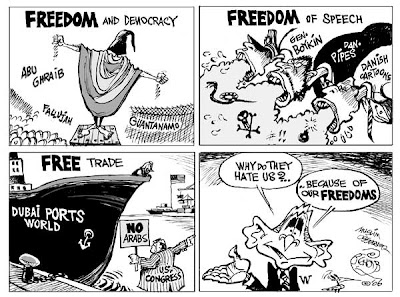 Poor Daniel Pipes. He's been caught out misrepresenting an Australian Human Rights Commissioner. In an effort to manufacture group-hatred against anyone deemed Muslim, he has repeated a report from a tabloid newspaper without bothering to check the source. And he's sent his trumped-up article to op-ed editors of Australian broadsheets.

Who knows how many other lies and distortions Pipes has knowingly or recklessly peddled in other articles promoting his kind of sectarian bigotry. But will this pseudo-academic polemicist stop?

(And will his followers stop leaving abusive and racist anonymous messages on this blog?)

Pipes has struggled to find a response to my allegations. He knows he has been caught out. He knows he should have checked with Commissioner Innes before repeating the discredited claims of a reporter from the Daily Telegraph tabloid.

In short, we are talking about Daniel Pipes.

And what is Pipes' precise complaint against my exposure of his deceipt? Pipes alleges that I have criticised him for making "a mistake in the caption to the picture [of Commissioner Innes] that accompanies [his] column".

Having re-read my post, I must concede that Pipes may have a point if we were to consider my treatment of his caption out of context from my entire post. But as any reasonable reader will concede, Pipes' so-called critique misses the broader point. Hence Pipes is able to repeat the dishonest claim that ...

... Innes indicates that the drivers sometimes cite a religious reason for refusing his guide dog, a clear allusion to the Shari‘a, the only religious law with strictures about contact with dogs.

Even on the Barking Buddies website, it mentions in relation to cab drivers that ...

They claim they’re afraid of the golden Labrador, or that she will make their vehicle dirty. One said it was against his religion to carry the animal in his car.

Yet Pipes happily uses the words of one cab driver are used to spread hatred and venom toward an entire sacred legal tradition and the 1.2 billion people across the globe who respect it (even if many don't follow it).

Pipes then concludes that this must be a reference to ...

... the Shari‘a, the only religious law with strictures about contact with dogs.

Perhaps Mr Pipes isn't aware that many non-Muslim cultures across the Middle East, Central Asia and South Asia also regard dogs as unhygeinic animals. Perhaps he isn't aware of the hygeine rules of some upper-caste Hindus or observant Sikhs.

But forget all that ecumenical and cross-cultural stuff. Pipes simply ignores the fact that Commissioner Innes has specifically stated on the record that ...

I never mentioned any specific religion and never intended to cast aspersions on any religion.

So if Commissioner Innes doesn't think this is an issue about Islam or Muslims or sharia, why does Daniel Pipes think it is? And why does Pipes insist on involving Innes in his unholy war against the religious law of 1.2 billion people?

Will Pipes now acknowledge that his article and update misrepresented the views of an Australian Human Rights Commissioner? Will Pipes admit he was wrong and apologise to Commissioner Innes?

Finally, it's clear Pipes hasn't even bothered to read Dr Williams' speech on sharia. Because if he had, he'd have realised that Williams specifically states that any reference to sharia in his speech equally applies to Jewish sacred law.

If Pipes was intellectually honest, he would spread hatred and venom toward Jews in equal measure as he does toward Muslims. He talks about the draconian punishments of sharia whilst ignoring the equally (if not more) draconian and violent teachings of Jewish sacred law.

There are parts of the Jewish law that talk about slaughtering women and children of gentiles. And stoning blasphemers and adulterers. These provisions still exist. The verses are there in the Old Testament. But seriously, how many Jews (other than the Israeli far-Right that Pipes often champions) seriously wish to implement these rules?

Scholars of the Jewish sacred law know that there was a time and a place for certain aspects of the sacred law. That time and place is not now. It has long gone. The same applies to Muslim jurists and the Islamic sacred law. Only the most fringe individual would suggest that we should start stoning adulterers in Sydney or London or New York (or even in Karachi or KL or Sarajevo).

Understanding and appreciating such issues requires a certain degree of intellectual sophistication. This is esoteric and complex stuff. It isn't the sort of stuff you'd expect to read on CampusWatch or a Pipes column in the New York Post. If this discussion and debate is out of Pipes' league, he should consider leaving it to others.

UPDATE I: Melanie Phillips, tabloid columnist and author of pseudo-conservative conspiracy thesis Londonistan, specifically refers to Pipes' fixation with guide dogs in a blog for The Spectator here. As expected, Phillips just cannot handle criticism. Hence she allows comments of those who share her big-"R" acism and huge-"X" xenophobia but not comments of her critics. Check these beauties out ...

... the chaff of Islamic dissembling.

... daily insights into the more disagreeble aspects of the Islamic world by the media (well, not Al Beeb and Al Gruaniad) and alerting people to the shape of the enemy ...

... any excuse to impose themselves on their host nations and express their disapproval ...

None of what is required to protect our culture is going to happen without an uprising taking place in the general population ... The best we can hope for is an after the fact resistance movement and guerilla warfare for the 50 or so years after takeover.

You don't have to be a Human Rights Commissioner to realise how scary and wacky these people are.