CRIKEY: Downer laughs at water-boarding and other "pretty fascinating" stuff ... 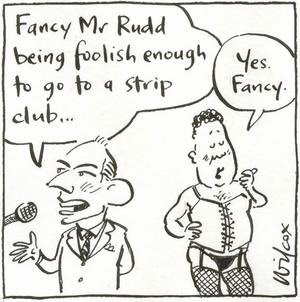 Well, it's great to see Alexander Downer having a good laugh in his retirement:


*Laughing at the use of waterboarding and other torture methods by our American allies in the "War on Terror";


*Laughing at the almost certain torture and mistreatment of two Australian citizens at Guantanamo Bay ("We did precisely the right thing. I think it was important we were tough");


*Laughing at Mamdouh Habib's further torture as part of the US policy of outsourcing torture (known as exclusive rendition);


*Laughing at how woefully the war in Iraq is going.


It's all part of a period Downer describes to John Lyons in The Australian today as ...


... that pretty fascinating period of my life.

On a slightly less-than-laughing matter, Downer alleges that the Hawke government had allowed our external spy agency ASIS to be run down to the extent that we weren't able to detect emerging threats such as the transformation of Jemaah Islamiyah into a full-blown terror outfit. He might have a point.


Yet he also acknowledges that ASIS didn't have any substantial intelligence on Iraq's WMD prior to the 2003 invasion. His excuse?


Yeah, but I mean we are obviously not main intelligence gatherers in Iraq, if I can be so indiscreet as to say that.

So Mr Downer sent other people's sons and daughters (but not his own) to fight a war based on the dubious intelligence of others agencies. At least Hawke waited for a clear UN mandate before committing Aussie troops in the 1990 invasion.


Indeed, Downer's FoxNews-type record on foreign affairs would be worth laughing at if it didn't have such potentially serious consequences for our international reputation and national security.


Downer's successor in the federal Seat of Mayo clearly couldn't find much to laugh about over the weekend, having received almost as big an electoral fright as Downer himself received in the 1998 Federal Election at the hands of a certain well-known folk singer.

First published in the Crikey daily alert for Tuesday 9 September 2008.