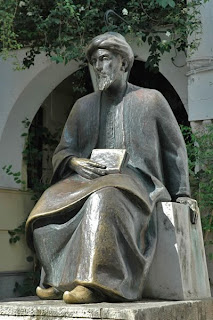 
Arab Derangement Syndrome. Or ADS for short. An obsessive hatred of all things Arab or associated with Arab (or broader Muslim) culture.

David Shasha is the director of the Center for Sephardic Heritage in Brooklyn, New York. The Center publishes the weekly e-mail newsletter Sephardic Heritage Update as well as promoting lectures and cultural events. His articles have been published in Tikkun magazine, The American Muslim, the Christian Progressive and other publications.

In a recent piece for the Huffington Post on the so-called "Ground Zero Mosque" controversy, Shasha argues:

In recent weeks, we have heard a number of prominent right-wing Jews like Bernard Lewis, Hillel Halkin, Daniel Pipes, and David Horowitz express their outrage over the use of Córdoba as a symbol of Muslim openness, arguing instead that Córdoba was a place of Muslim intolerance and fanaticism.

In the midst of this new ginned-up outrage over what Sephardic Jews see as their cultural home, we can discover a much larger problem that has surfaced in what has become "Arab Derangement Syndrome" among so many Zionists.

Over the course of many centuries, Sepharad/Al-Andalus was a marker of Jewish creativity and cosmopolitanism afforded by Islam in contrast to the prison that was Christian Europe. "Arab Derangement Syndrome" sees things in quite the opposite way.

The current demonization of Córdoba stems from an irrational and fanatic hatred of all things Arab and is clothed in the disingenuous garb of academic expertise. European-style Anti-Semitism is back-referenced to the Arab world ...

In other words, the Spanish city of Cordoba under Muslim rule was and remains the cultural heartland of a large proportion of the world's Jewish population. Yet other Jews are engaged in a process of what Shasha describes as ...

... this recent demonization of Sephardic Jewry and its Arabic culture ...

The piece makes very enlightening reading, though I wonder whether Shasha's depiction of Ashkenazi Judaism as being ...

... caught up in its disdain for the outside world and conducted an internecine battle waged over strictness in the observance of Jewish ritual.

Shasha also has some harsh words for Zionists who enter into alliances which the ideological descendants of their former persecutors.

Jews, in spite of their startling success in the Western world, feel more alienated and fearful than at any other time in their history. This is strange given the recent experience of the Nazi genocide. But what Zionism and the ongoing problems of the state of Israel have generated in many Jews is a sense of insecurity that has served to reframe and refocus the Jewish mindset. Alliances with fundamentalist Christianity serve as a marriage of convenience that strengthens the perceived vulnerable status of Israel in what is seen as a region of Arab-Muslim barbarians. This is back-referenced to the Middle Ages and to Islamic Spain and Córdoba, and ultimately linked to the Sephardic Jews and their Arabic culture ... The demonization of Córdoba is often accomplished with the help of the very Sephardim whose history is being ripped to shreds by their Ashkenazi brothers. This Jewish fratricide is not simply an obscene act of sociocultural violence by one part of the Jewish community against another; it is a sign of a much larger problem for the Jewish world.


Those nutty anti-Semites (sadly many of them Muslims) who still maintain fantasies of Jewish conspiracies should take their heads out of the sand.