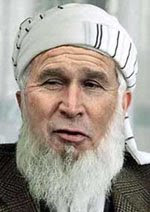 Richard Kerbaj, formerly of The Australian and author of numerous articles displaying his Lebanese-and-Arabic-speaking skills, has now moved to London to take up a post at The Times. Both The Australian and The Times are owned by Rupert "Muslims-marry-their-cousins" Murdoch.

[UK readers will be amused by Kerbaj's colleagues at the Melbourne Herald-Sun confusing Abu Hamza with Abu Hamza.]

[Though given Kerbaj's past performance with labelling, one wonders whether in this particular article, by the term "spiritual leader", he means an imam. Or does he mean a pir? Or a murshid? Or how about a hoca? Or a maulana? Or even a molvi? Or how about a sidi? And why has he stopped using the term "Muslim cleric" as he often did in Australia?]

I'm not sure if Kerbaj will focuss much of his time at The Times focussing on UK Muslim issues. But just how qualified is he for this task? Does Kerbaj have any clue who leads the liturgy and educational needs of Britain's various Muslim sects and cultural groups? Can Kerbaj identify one maslaq from another? Does he understand the differences between various shades of Deobandi, Barelwi and Ahl-i-Hadith? Does Kerbaj speak Urdu or Bangla?

These questions are pertinent. After all, in Australia so much of Kerbaj's information came from various Lebanese groups whose political nuances he had little understanding of, despite his own Lebanese heritage.

Much of Kerbaj's information on Aussie Muslim management issues came from followers of Abdullah Hareri and the al-Ahbash sect. One wonders whether in London, Kerbaj's sources come from the equal and opposite of al-Ahbash i.e. the followers of Nazim al-Qubrussi (attacked on an al-Ahbash website here) and and his student Hisham Kabbani?

One of Kerbaj's main sources in his recent story is Irfan al-Alawi from the UK branch of the Centre for Islamic Pluralism. Al-Alawi claims to be a follower of a Yemeni Sufi master who has close associations with Imam Hamza Yusuf Hanson of the Zaytuna Institute.

[The Executive Director of that Centre's head office in the United States, Mr Stephen Suleyman Schwartz, whose profile you can read on that wonderful blog Jewcy where you'll also find a fascinating post on why he sees Islam as "Judaism for the Whole World". Amir Butler claims here that Schwartz is a follower of Hisham Kabbani, though Schwartz doesn't mention Kabbani at all in this interview with National Review Online. Schwartz claims to be a proponent of traditional Islam and Sufism, though his repeated personal attacks on Imam Hamza Yusuf Hanson (a prominent proponent of traditional Islam) borders on obsessive.]

Australian readers will be familiar with Kerbaj's usual mantra that Wahhabi Islam is virtually a unitary phenomenon espoused by Usama bin Ladin. He repeats this mantra for the consumption of UK readers in his latest piece ...

During its investigation the organisation - the British arm of a longestablished US think-tank - received a number of complaints about imams who had turned a blind eye to cases of domestic violence, many of whom are followers of Wahabbism, a puritanical interpretation of the Koran espoused by Osama bin Laden.

Some readers may wonder why a White Ribbon Day Ambassador like me should object to a report the publication of which is clearly in the public interest. Surely religious leaders of any congregation turning a blind eye to domestic violence must be exposed and shamed. Why should Muslims be any exception?

Muslim spiritual leaders could be denounced publicly by their own community as part of a campaign to expose imams whose silence on domestic abuse is leading to women being burnt, lashed and raped in the name of Islam.

Muslim scholars are to present the Government with the names of imams who are alleged by members of their own communities to have refused to help abused women. Imams are also accused of refusing to speak out against domestic abuse in their sermons because they fear losing their clerical salaries and being sacked for broaching a “taboo” subject.

Some of Britain's most prominent moderate imams and female Muslim leaders have backed the campaign, urging the Home Office to vet more carefully Islamic spiritual leaders coming to Britain to weed out hardliners. A four-month inquiry by the Centre for Islamic Pluralism into domestic abuse has uncovered harrowing tales of women being raped, burnt by cigarettes and lashed with belts by their husbands, who believe it is their religious right to mistreat them.

At least 40 female Muslim victims and many social workers from northern England - including Bradford, Manchester, Leeds and Birmingham - were interviewed as part of the inquiry, which is expected to be published next month.

And why should someone like yours truly, who has a history of criticising a young Sydney imam and a former Australian Mufti for their ignorant and dangerous comments on sexual assault victims, have a problem with Kerbaj doing the same?

The problem is that Kerbaj might be accused of using domestic violence as an excuse to play a game of journalistic sectarian wedge-politics. The last thing we should be doing is believing that the only imams who justify or turn a blind eye to domestic violence are Wahhabis and the Tabligh Jamaat, whom Kerbaj claims is ... wait for it ...

... accused of radicalising young British Muslims with its orthodox teachings.

[One wonders how some of Kerbaj's sources, who claim to be more true to Islamic orthodoxy than the TJ, would respond to Kerbaj's claim that orthodox Islam radicalises young British Muslims.]

But my real objection to Kerbaj's article (at least based on my own reading of it) is the same as my objection to any attempt to focus on one group of domestic violence perpetrators whilst ignoring another group. Or my objections to scribes, pundits and politicians behaving like defenders of sexual violence victims when it suits their prejudices.

Here's an excerpt of what I wrote about this topic in the Australian Jesuit publication Eureka Street ...

This isn't just another case of inconsistency inspired by sectarian prejudice, of what's good for the Muslim goose being not good for the non-Muslim gander. The clear message is that misogynistic or insensitive remarks about sexual assault victims are only worthy of universal condemnation if those making the remarks belong to the 'wrong' religious, ethnic and/or cultural background ...

When sexual assault becomes a cultural or sectarian wedge, it demeans and insults the suffering of all victims and their families. It also opens to question our society's commitment to unconditionally ending violence against women.

On the other hand, Kerbaj might argue that he wasn't expressing any opinion. He was merely reporting the facts. However, consider these points ...

a. Is the CIP the first and/or only UK Muslim group to tackle community attitudes toward domestic violence?

b. What standing does CIP have in mainstream British Muslim circles? I'm not just talking about religious circles but also cultural (e.g. South Asian) and language (e.g. Hindi/Urdu, Punjabi and Bangla) circles.

There are other factors to consider. Perhaps Kerbaj would have factored all these points in if he'd been provided with a more generous word length. And as I've already said above, Kerbaj's article isn't as bad as his past work, some of which does little more than perpetuate a Team America take on Muslims. When it comes to identifying Islamic sectarian nuances, at times Kerbaj has tripped over even the most basic kindergarten stuff.

UK readers of this blog should keep a close eye on Kerbaj's work. At the same time, we should all remember that it often isn't easy for journalists to report on such issues.

(Thanks to PK and BC for the tip-off.)

UPDATE I: Another article (in fact a case study of one victim ignored by her local imams) by Richard Kerbaj is well worth reading. This is really disturbing stuff. We can bag reporters like Kerbaj all we like. But who is going to protect women like 'Aliya'?