OPINION: Look past Bali bombers for true picture of Indonesia

I have just spent a couple of hours experiencing the lights and sounds and costumes of a ballet. But this was no Swan Lake. It was the performance of an ancient Hindu epic known as the Ramayana.

The costumes and masks of the cast were phenomenal, as were the accompanying orchestra and singers.

The ballet was performed in the shadow of one of the oldest Hindu temples on earth.

But what made the performance amazing was not the music, the instruments or costumes. It was that this ballet was being performed as a cultural performance in the world's largest Muslim country. 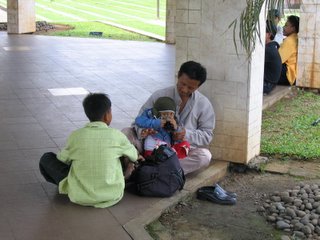 The Ramayana is performed regularly to Muslim audiences across this archipelago, 88 per cent of whose population regard themselves as Muslim.

When our delegation of young Australian Muslims arrived at the temple grounds, in the Indonesian university town of Yogyakarta, we were expecting to witness a distant relic of Indonesia's ancient pre-Islamic past.

Instead, we were greeted with the traditional Arabic greeting of "assalamu alaykum" (peace be with you).

It was unclear whether our hosts were Hindu or Muslim. But, without doubt, most of the actors were Muslim, as were most of the audience.

Many were young couples for whom a trip to a Hindu ballet was a culturally appropriate night out. Many were women wearing headscarves.

For Indonesian Muslims, Hindu and Buddhist influences are celebrated as part of their mainstream culture.

Islam arrived in Indonesia through traders and was spread peacefully by Chinese and Yemeni merchants.

It adapted to existing Hindu and Buddhist cultures and co-opted the symbols of these faiths.

In India, the birthplace of the Ramayana hero has become the scene of conflict.

The dispute over the mosque and its destruction by Hindu extremists in 1992 has led to religious riots in which tens of thousands have been killed across northern India.

But while the Ramayana hero is at the centre of conflict in India, Indonesian Muslim actors take part in a Ramayana ballet with a largely Muslim audience. 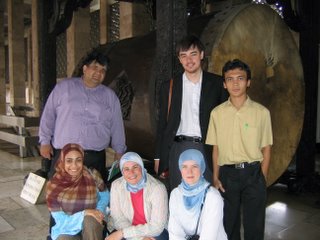 In Jakarta, our delegation visited Indonesia's largest mosque - the Masjid Istiqlal (Independence Mosque), which holds up to 50,000 people.

Before the traditional call to prayer, a drum is beaten, consistent with traditional Javanese Hindu culture. Women and men enter the mosque from the same entrance and pray in the same pavilion without any curtain.

It seems the largest Islamic country in the world is far more liberal in gender matters than other Muslim cultures in which women are often banned from the mosque or relegated to a separate area.

Across the road from the Independence Mosque is Jakarta's Catholic Cathedral. On Sundays, the cathedral's car park is quickly filled and the mosque authorities let Catholics park on the mosque premises.

In the post-Suharto era, the Chinese New Year has become a public holiday and is even being celebrated in some Indonesian mosques.

Perhaps Muslims in other parts of the world can learn from Indonesia's example.

Indonesia may be seen as a hotbed of extremism and anti-Western feeling. But whatever Indonesians may think of Western governments, their attitude toward all cultures and faiths appears far more open than many Western countries that claim to be multicultural.

The Ramayana Muslim artists are more representative of mainstream Indonesian Islam than the Bali bombers.

*Irfan Yusuf is a Sydney lawyer visiting Indonesia as part of a delegation of Young Australian Muslims. This article was first published in the New Zealand Herald on 26 January 2006.