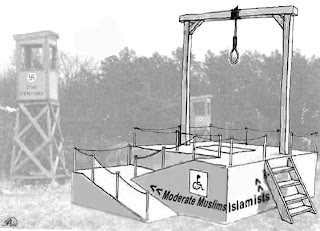 I wonder if Michael Danby will make a speech in Parliament about this.

Tim Blair, far-Right opinion editor of the Sydney tabloid Daily Telegraph, published a comment on his blog that literally calls for Mecca to be destroyed and facilitated all-out war in South Asia and the Middle East involving invasions of Pakistan, Saudi Arabia, Egypt, Lebanon, Syria etc.

The US should have immediately attacked Mecca with a nuclear strike and brought the war to the heart of Islam.

They should have let the Indians off the leash to do what they want with Pakistan and Afghanistan, told the Israelis that they can smash the Jordanians, Syrians and Gypos, then landed half the USMC in Libya and Lebanon and steamrolled east and south until they linked up with the Israelis.

The US Army and the other half of the USMC should have been deployed to the Gulf and launched an invasion of Saudi and Iraq and pushed toward Syria.

Everyone else should have been told to eff off until the job was done and then some.

This is where Bush failed. He was too soft on them. Too soft.

Wholesale massacre and genocide. Tim Blair allows it on. He thinks it satisfied his newspaper's moderation policy. His editor Gary Linnell doesn't seem to mind. And the Member for Federal Ports hasn't said a word yet.

But hey, it isn't racist to call for people to be murdered and bombed and turned into compost on the basis of their deemed religion. I mean, religion is a matter of choice, isn't it? And Muslims aren't a race, are they? It ain't genocide, is it?