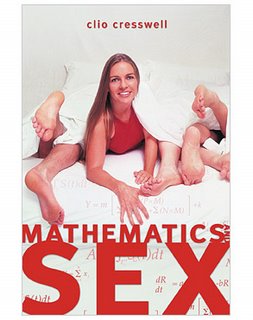 Last year, I found myself falling hopelessly in love with a supremely gorgeous, comprehensively attractive brunette.

And what was it that attracted me to her?

Was it her long straight brown hair that made her look like Angelina Jolie? Was it her tall forehead that betrayed a strong South-East Asian streak? Was it her dark olive skin resembling that of the delightful Kate Ceberano? Or was ut her thuck eksunt thet gave away her Kiwistani roots?

Actually, to quote the ‘80’s one-hit wonder Thomas Dolby, she blinded me with science. This babe had the brain of an Einstein. She could tell me all about the brain and its functioning, about the effects of certain medications and much much more.

Brains are sexy. And as I was cleaning out my previous editions of the Australian Financial Review, I discovered another beautiful mind.

Hiding in page 31 of the April 10 edition, I found a profile of academic and writer Dr Clio Cresswell. This 30-something brainy bombshell is a Senior Lecturer at the University of Sydney and regularly hits the speakers' circuit. She has appeared on ABC TV, Radio National and on the Triple-M breakfast show.

Dr Cresswell’s book is entitled Mathematics And Sex and is published by Allen & Unwin. I checked Amazon.com and read someone surnamed Hyman complain as follows:

“I disliked that there was not enough math. Formulas are presented without defining any of the terms.”

Which, I guess, is a compliment. Heck, I'm not exactly mathematically challenged. Despite going onto fail 3 undergraduate accounting subjects, I managed to get 143/150 in 3-unit maths in my NSW Higher School Certificate. But I certainly couldn’t be bothered reading another boring bloody mathematics textbook!

“The author writes rather too often about her sexual past, her personal views on orgasm, etc. It would have been better if she'd avoided personalising it altogether. Maybe she thought personal sex/relationship anecdotes would be funny, but if so, it didn't work with this reader.”

Bob obviously doesn’t have much of a sex life, or else he’d be writing his own edition. Or maybe Bob should have attended the course Dr Cresswell taught at Canisius College in Buffalo NY in 2004.

Then again, maybe I should have gone as well!

If these are the sorts of reviews Dr Cresswell is receiving for her book, I am extremely jealous. Apart from not being mentioned as part of her mathsexual exploits, I’m also doubtful anything I wrote would be reviewed in such tones.

Thankfully AFR writer Rachel Nickless focuses her attention on Dr Cresswell’s mathsexuality. Cresswell is described as a pioneer researcher whose “tough work” includes finding “the formula for the perfect orgasm”.

Nickless tells us that Dr Cresswell is hardly “the stereotype of the retiring mathematician”. Instead, Cresswell looks “more like a bronzed surfer, albeit a very articulate and intelligent one.”

And for those contemplating a visit to the dating agency, Cresswell suggests a more mathsexually appropriate alternative would be trying the “12-bonk rule”. According to this formula, you should try the first 12 partners and then pick whoever is the next one better than the others.

At least I think that’s how it works. I guess I wasn’t that good at maths. Maybe Dr Cresswell could explain it to me over lunch.

As part of her further research, Dr Cresswell will be examining the key factors of the orgasm. Once these can be identified, they can be explained using formulae and graphs. Sadly, this will limit the need for practical testing.

If you want to learn more about the calculus of coitus, you might have to join me and probably a few thousand other mathsexual converts at Dr Cresswell’s public lecture scheduled for May 17 2006. AFR’s Rachel Nickless says that the number to call is (02) 9351 3021.