BOOKS: Disorganised thoughts on Geraldine Brooks and the Sarajevo Haggadah 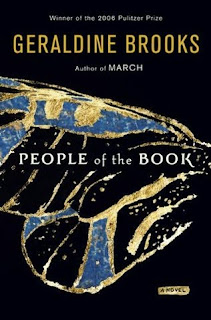 So Islam doesn’t belong in Judeo-Christian Europe. So Muslims are inherently anti-Semitic. And so if you don’t believe all this, you are either an “Islamo-fascist” or a poor non-Muslim suffering from “dhimmitude”.

Far-Right wackos like Raphael Israeli and Robert Spencer might have you believe this tripe. But Australian journalist and writer Geraldine Brooks’ latest novel, based on the preservation of the Sarajevo Haggadah, shows up the historical nonsensicality of the arguments so often sprouted by Muslim-hating cultural warriors.

In a previous book Nine Parts of Desire, Brooks tells of her conversion to Judaism. I’m not sure if, like all converts, she has an evangelical zeal or a desire to play a quieter form of emotional catch-up to compensate for years spent without her adopted faith.

Judaism has experienced a long period of persecution in Christian Europe. Jews were castigated as Christ-killers, as devious money-lenders and as demons who ate Christian babies. If a Jew occupied a high position in society, he was accused of being a fifth columnist and a traitor.

Today, Islamist revivalist groups like Hizb ut-Tahrir (HT) make use of the sufferings of Muslims in various parts of the world as a rhetorical tool to support the idea of an Islamic state. One may regard their use of current affairs as cynical. On the other hand, there may be an element of what one might call the “Herzl effect”.

Theodore Herzl, an Austrian journalist of Hungarian Jewish heritage, witnessed the vulnerability and persecution of his people in action when covering the disgraceful court marshal in France of Jewish army officer Alfred Dreyfus. Herzl concluded that without a Jewish state, Jewish minorities would forever remain vulnerable.

Some may regard this kind of thinking as dangerous. Certainly, some despicable acts have been committed in the name of establishing and/or preserving Islamist political entities. But it is difficult to deny the attraction which political solutions hold for impatient and excitable people.

Genuine spirituality and religion, on the other hand, thrives on persecution and suffering. Last Christmas, I gave an old school friend an encyclopaedia of Christianity. The introduction to this heavy tome listed a number of themes that frequently arise in Christian history and theology. High up on his list was martyrdom.

Let’s return to Ms Brooks’ novel. No religious tradition has had to fight and struggle and suffer as face persecution and death to preserve itself than Judaism. Brooks’ novel is centred round the story of a medieval Spanish edition of an ancient Jewish text which was preserved for centuries, largely by Muslims in many cases risking their lives.

The Australian Jewish News summarises the story in this article as follows:

The Sarajevo Haggadah was created in about 1350, probably as a wedding gift, but it changed hands -- and countries -- a number of times over the centuries. The full details about how and when it arrived in Sarajevo are not known, but it was sold to the Bosnian museum in 1894 by Joseph Kohen.

Legends formed about where and how it managed to survive. During World War II, just before the Germans entered the city in 1941, the director of the museum smuggled it to a Muslim professor who hid it in a mountain village, some say under the floor of a mosque.

Its whereabouts during the 1992-95 Bosnian war are a matter of rumour. The museum was bombarded and badly damaged, but the Haggadah survived unscathed, hidden for most of the time in a vault of the National Bank.

Bosnia's then-president, Alija Izetbegovic, displayed it briefly at a community seder in 1995, partly to dispel speculation that the government might have sold it to purchase weapons.

Under Ottoman rule, Sarajevo offered sanctuary to Jewish communities fleeing the Catholic Inquisitions in various parts of Europe (mainly Spain). The horrors of the Inquisition, which make the misdeeds of al-Qaeda pale into insignificance, were inspired by a murderous intolerance of all non-Catholic religion.

Among the relics of Andalusian Jewish life brought to Sarajevo, soon to be known as the Jerusalem of Europe, was a copy of the Haggadah. I am fortunate to have a copy of the Illustrated Haggadah produced by Rabbi Michael Shire and published in 1998. That edition includes a number of illustrations from the Haggadah collection of the British Library. I’m not sure if it includes the Sarajevo Haggadah, the subject of Brooks’ book.

Robert Dessaix reviews Geraldine Brooks’ recently released novel People Of The Book in the Sydney Morning Herald on January 26-27 2008. Here are some excerpts:

In 1992, while Serb forces were shelling the National Museum Library in Sarajevo and the very air in the streets was clogged with ash from hundreds of thousands of burnt books and documents, a Muslim librarian risked his life to rescue one small Jewish book from the conflagration.

Half a century earlier another Muslim scholar in Sarajevo had risked execution to save the same book from being seized by a Nazi commander. And further back it had survived a botched restoration in Vienna, the Inquisition in Venice, the expulsion of the Jews from Spain and God alone knows what other threats to its preservation, from perilous sea voyages to anti-Semitic madness …

The redemptive symbolism of the Sarajevo Haggadah is obvious: a Jewish religious text, illustrated according to the Christian model of a Book of Hours, saved by Muslims in a city almost destroyed by ethnic hatreds.

Dessaix says a few other things about this book which I’d prefer not to reproduce. Those interested can go out and buy the book and reach their own conclusions.