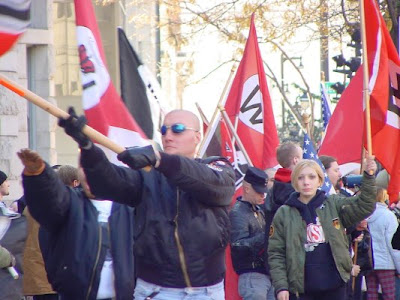 They say you can judge a man by the company he keeps. And anyone with an ounce of decency wouldn't want to be in the company of Tim Blair and his blog cronies, even if it only be on cyberspace.

To save readers from the pain of visiting the blog of the Opinion Editor of the Daily Telegraph, I thought I would post some of the best moments in Blair's "moderation". From time to time, I'll share some classic comments from Blair's moronic cheersquad so that readers can see just how little the powers-that-be at the Tele care about their paper's exposure to legal risk.

Here are some classics from today:

ann j replied to kae
Thu 15 Jan 09 (04:18pm)
Ah, for the good old days. The Middle Ages, for example, when torture was torture and the victim had a choice of the rack, wheel and thumbscrew, boiling, the bastinado and iron maiden, the wire jacket, being drawn and quartered…

And a classic from regular Blair web-buddy RebeccaH from yesterday ...

Honor killings have happened in the USA as well as Canada. The spread of Islam (and Middle Eastern “culture") is driving the world back into the Dark Ages.
RebeccaH of the New Dystopia
Thu 15 Jan 09 (05:45am)

I guess Rebecca isn't too fond of that Palestinian Jewish chap from Bethlehem ... what was his name again? ... Jesus?

And here are some beauties from Tuesday in a post devoted to the brave Australian soldier who died in Afghanistan:

Alan of Sydney replied to Daniel Lewis
Tue 13 Jan 09 (02:31pm)
... The jury is still out as to how beneficial Muslim immigration will be - especially in these PC times where it’s OK to hate Jews but not permitted to hate Muslims.

The Muslim contribution will have to be counted in more than birth-rate I’m afraid.

jupes replied to Daniel Lewis
Tue 13 Jan 09 (02:47pm)
... The Jewish people of Australia have an outstanding record in law, medicine, the arts, business and government, not to mention producing perhaps the greatest ever Australian, Sir John Monash, the outstanding allied general of WW1.

The Muslim people of Australia have an outstanding record in terrorist convictions, marching in support of terrorist organisations, raping women based on race, and general anti social behaviour.

The contrast couldn’t be more stunning.

Daniel Lewis replied to Daniel Lewis
Tue 13 Jan 09 (03:09pm)
I don’t really want this thread to turn away from Greg Sher, whose memory deserves to blessed.

However, if you want to compare Jewish intellectual output with Islamic output, it’s a pretty short game.

There are a mere 12 Million Jews in the entire world yet they have received 184 Nobel Prizes.

But they have NINE!. [One was stabbed in the back by Islamists for his achievement], and one of them [Arafat] was a murderer

Comparing Jews to Muslims is a waste of time. I was focusing specifically on immigration to Sydney, for which you can probably use any other ethnic immigrant group as an comparison.

Ever notice that when the Taliban or the Palestinians or most any other Muslim terrorist group commit an act of violence, it’s usually shooting a rocket? And when the Aussies fight, it’s usually up close, man to man?

Okay, I’ll grant there’s an exception when it comes to punishing unarmed women for baring an ankle or allowing themselves to be raped. Muslim men are all upfront and personal when it comes to putting women in their place.
Winfield of Ohio (Reply)
Tue 13 Jan 09 (09:36pm)

VIDEO: Nick Griffin and the taqiyya of the far-Right ...

Far-Right extremists like Nick Griffin, Raphael Israeli and Robert Spencer often speak of their latest enemy (Muslim migrants) as using a strategy of taqiyya to hide what is allegedly their real agenda of taking over the West by stealth (or "stealth jihad").

But as Griffin discloses in this video, his far-Right BNP is using its own form of taqiyya. It might explain the sudden change in emphasis whereby they have gone from being anti-Semitic to becoming fervently pro-Israel, hoping their real agenda can be hidden behind the coat-tails of conflict in the Middle East.

This might explain why some anti-Arab and anti-Muslim Zionists to become more open with their venom and are hence being embraced by the far-Right.

I've been impressed with the work of British sociologist Frank Furedi ever since I saw him speak at a symposium on Enlightenment values organised by the (right-of-) Centre for Independent Studies last year.

Furedi is hard to pidgeon-hole. He skirts around the edges of liberal, conservative and libertarian. Perhaps the best way to describe him is independent. He doesn't treat issues like so many cultural warriors do - as if every issue has to be treated as a choice between binary opposites, as spectators in some kind of ideological footbal match where one must barrack for one side or the other. At least that's my assessment in the brief time I've been following his work.

I don't agree with Furedi on many issues, but I can't also help noticing him often displaying the kind of consistency that can pierce through layers of rhetoric and popular hysteria. This is on display in his most recent column published in The Australian today.

Anyone who follows this blog will know that in the current crisis between Israel and HAMAS, my sympathies are firmly with civilians of both sides. I believe the greater aggression is being committed by the Israeli Defence Forces, and Israeli spin-doctors are lying through their teeth.

But how should we respond? Do we automatically assume criticism of Zionism or Israel's actions necessarily represents anti-Jewish sentiment? I agree with Furedi when he writes:

I HAVE always criticised the tendency of some Zionist commentators to dismiss all criticism of Israel as anti-Semitic.

Such a defensive knee-jerk reaction simply avoids confronting the issues and undermines the possibility of dialogue.

If all you can do is place labels on those who disagree with you, it's obvious you aren't terribly interested in dialogue. However, we also need to recognise prejudice wherever it is found. We need to call a spade a spade. If Israeli racism toward Palestinians (where it exists) is evil, so is racism toward Israelis and/or bigotry toward Jews.

In fact, the very notion that the actions of Israel necessarily reflect the sentiments of those who tick the "Judaism" box on their census forms is grossly offensive, even if it is something which some unconditional defenders of Israel regard as an article of faith.

So it should be of great concern when someone as independently-minded as Furedi writes paragraphs such as these:


... in recent years, especially since the eruption of the latest conflict in Gaza last month, anti-Israeli sentiments often mutate into anti-Jewish ones. Recent events indicate that in Europe the traditional distinction between anti-Zionist and anti-Jewish feelings has become confusing and blurred.

During a demonstration earlier this month, the Dutch Socialist Party MP Harry van Bommel called for a new intifada against Israel. Of course he has every right to express this political standpoint. However, he became an accomplice of the anti-Semites by choosing to do nothing when he heard chants of "Hamas, Hamas, all Jews to the gas" and similar anti-Jewish slogans. Many people who should know better prefer to keep quiet when they hear slogans such as "Kill the Jews" or "Jews to the oven" at protest demonstrations.

At a demonstration in London, such chants provoked little reaction from protesters who otherwise regard themselves as progressive anti-racists. Nor did they appear to be embarrassed by the sight of a man dressed up as a racist Jewish caricature - wearing a mask with a long, crooked nose - pretending to eat babies.

Increasingly, protesters are targeting Jews for being Jews. The demand to boycott Israeli goods in practice often means a call to boycott Jewish shops ...

And in case you thought this was limited to some crazy Muslim types, consider this:


European anti-Semitism is not simply a rhetorical act confined to a minority of Islamists or pro-Palestinian protesters. In Britain, Jewish schoolchildren have been castigated for belonging to a people with "blood on their hands". Their elders sometimes encounter intimidation and regularly report having to face verbal abuse ...

There is no doubt that the conflict has intensified the frustration and anger of supporters of the Palestinian cause. But it is important to note that the rise of European anti-Semitism is not a direct outcome of the fighting between Israel and Palestinians.

Muslims themselves are not immune from this, often hiding it as anti-Israel feeling.


During the past two decades, and particularly since 2001, anti-Western feelings among European Muslims are often expressed through the language of anti-Semitism. Denunciations of the US are frequently accompanied by the targeting of the Jewish lobby's alleged influence. Such attitudes have gained momentum throughout this century.

For example, one survey carried out in 2002 indicated that 25 per cent of German respondents took the view that "Jewish influence" on American politics was one important reason why the Bush administration invaded Iraq. The association of Jews with business, finance and the media has encouraged current anti-consumerist and anti-modernist sentiments to regard the influence of "these people" with concern. Is it any surprise that last year there was an explosion of conspiracy theories on the internet which blamed Jewish bankers for the financial crisis?

Muslims don't like it when people make up generalisations about them. It is true that some of those generating prejudice against Muslims are themselves of nominally Jewish heritage, including those behind the Obsession DVD that was distributed during the last US elections. But how reflective are these people of mainstream Jewish opinion? And if it is reflective (something which I strongly doubt), does that mean Muslims should replicate? How effective is it to fight prejudice with prejudice?

Around 50% of Gaza's population are children under 18 years. Some 80% live below the official UN poverty line. But before you get angry at Israelis, remember the name of Amira Hass. And before you become angry at Jews, consider all the millions of Jews who refuse to openly support this bombardment.

A Jewish Sage named Hilel who lived just before the time of Christ once remarked:

The wise ones of either "side" are in fact on the same side.