That's what is happening in Egypt. So what about Australia? This is what we read in The Australian:

Father Gabriel Yassa, of Archangel & St Bishoy Church, at Mt Druitt, in Sydney's west - one of the targeted churches - told The Weekend Australian that the nation's Islamic leaders needed to speak out against the threats.

"I just hope that the leaders in the Islamic community take their responsibilities well and crush out any of those elements in their community," Father Yassa said.

"The important thing is that all of us take this matter seriously and look out for one another."

Father Yassa said he did not know the exact wording of the threat, but said the terrorist group was "just throwing out a message to the Islamic community to hurt Coptic Christians and I suppose they then just wait to see whoever picks up on it and who goes with it".

What unnecessary and ridiculous comments to make at this time. Does Father Yassa honestly think that terrorist groups put out feelers to get ordinary Muslims to bomb churches?

Instead of inviting Muslims to a common platform, Father Yassa seems more interested in alienating them. He must be getting PR tips by watching clips of Shaykh Hilaly's past verbal indiscretions.

Seriously, how ridiculous. No doubt many Aussie Copts will be extremely embarrassed.

Perhaps someone should remind Father Yassa that when anti-Muslim prejudice rises in Australia, among the first targets are Arab churches that resemble mosques. Like the Egyptian Coptic church shown below while under construction. 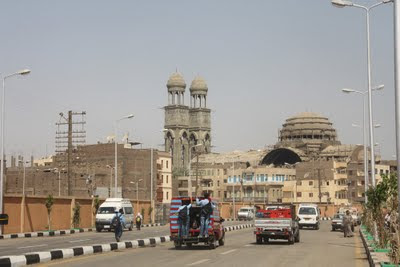 On the other hand, Muslims need to do much more than speak out. We need to pressure embassies and governments of Muslim-majority states to ensure that the rights of religious minorities are protected.

UPDATE I: Very interesting discussion on the Riz Khan show below.