One reader recently told me that he believed my use of the name "Ayaan Hirsi Hilali" in this posting was inappropriate. He argued that it would be inappropriate to compare a religious scholar to an ignorant know-it-all who chooses to be an athiest. Apart from Sheik Hilali making the frequent claim to being quoted out of context, there really is no comparison between him and Ayaan Hirsi Magaan/Ali.

I think he may have a point, although to some extent he has also missed the point. What do other readers think? Should we in any way be comparing religious scholars to those who incite hatred against believers?

Comments are welcome. And a message to the moron who leaves violent, threatening and abusive messages here: I know who you are.

CRIKEY: Oz government sort of, but not really, opposes the death penalty ... 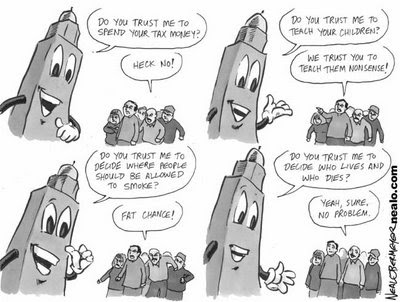 The Herald Sun reports that Foreign Minister Stephen Smith reckons there is no contradiction between pleading clemency for Australian drug smugglers but not for convicted terrorists. I guess that’s one way of putting it.

A more accurate way is to say that the Australian government openly opposes the death penalty, but at the same time doesn’t oppose it. It really depends on who is doing the dying.
If you’re a convicted terrorist, you should die. You have killed ordinary Australians and other innocent civilians, and have brought misery to their families. But if you are a convicted drug smuggler, you clearly haven’t brought misery to anyone.

Let’s face facts. 88 Australians died in the 2002 Bali bombings. Meanwhile, one South Australian study shows that in 1999 in Adelaide alone, ambulance workers responded to a total of 2,990 overdoses. Of these, 424 were caused only by a narcotic drug or a cocktail of narcotics.

A more recent national study conducted by the Australian Institute of Health & Welfare, 1,705 deaths across Australia were attributable to the use of illicit drugs in 2003. Further, during 2003-4, the number of accidental opioid overdose deaths for Australians aged 15-54 was 357. Opioid substances include heroin, morphine and other similar substances. Then, of course, there are HIV and other STD-related deaths.

As for affects on families, just ask someone who has cared for a relative with a narcotic-induced mental illness what it’s like. Go to pp38-9 of the AIHW report to find out the prevalence of mental illness among illicit drug users.

If Stephen Smith expects us to believe that terrorists and their weapons destroy more Aussie lives than drug pushers and their merchandise, he seriously must be taking something illicit himself.


If we don’t respect our values enough to apply them consistently, we can’t expect terrorists and those they seek to recruit to take us terribly seriously.


First published in the Crikey daily alert for Monday 11 August 2008.