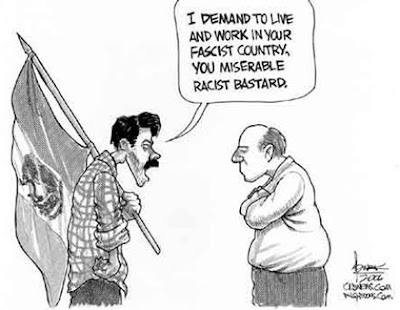 Recently I was listening to an old episode of Counterpoint, a program broadvast on Radio National. The episode was from 4 March 2006 (or is that 3 April? It's hard to tell with old iPods). The host Michael Duffy (an author, former publisher and columnist for the Sydney Morning Herald) was interviewing Andrew Norton, editor of the journal Policy published by the Centre for Independent Studies.
Norton had published an article in Policy addressing the issue of whether Australia was a racist country. I haven't read the article, though I think this is where you can find it.
During the interview, Norton and Duffy discussed the relationship between racism and immigration. They both seemed to agree that opposition to immigration during the latter half of the twentieth century in Australia wasn't necessarily to do with racism but was more an issue of the fear among Australian workers of migrants taking jobs. So a person's opposition to immigration shouldn't be necessarily treated as racism.. Fair enough.
Later in the conversation, Norton Duffy state that immigration increased under the Howard government. This, they alleged, meant that the Howard government (and presumably John Howard) were therefore not racist.
So if you support the pursuit of policies that lead to an increase in immigration, you simply cannot be racist. But if you oppose immigration, you aren't necessarily racist. Go figure.
One interesting thing raised in the discussion was a poll which showed that, within 2 years of the Holocaust ending, over 50% of Australians opposed Jewish immigration. And they tell us we have a dominant Judeo-Christian heritage. G-d help them.
Words © 2008 Irfan Yusuf
Posted by Irf at 4:31 pm