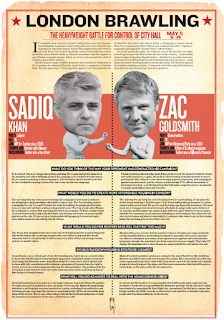 Sadiq Khan studied law and worked as a human rights solicitor. He was made a partner of the law firm within a mere three years. He ran controversial cases pursuing the human rights of some very unpopular figures. Khan left practice and in 2005 was elected to Parliament in his local seat of Tooting. Yet being lawyer to the damned didn't stop him from securing 1.3 million votes in last week's London mayoral election, in what George Eaton in the New Statesman described as


the biggest personal mandate of any politician in UK history.

What could have stopped Khan was his Conservative opposition's constant insinuation that Khan's ancestral religious culture (his parents are Indo-Pakistani Sunni Muslims) somehow made him less desirable as mayor.

Ironically, the sister of the Conservative candidate not only married another politician surnamed Khan but also adopted his faith. Jemima Goldsmith is no longer married to Pakistan's former cricketing legend and political leader Imran Khan. She expressed disappointment and disgust in the way her brother's campaign spent so much time trying to link Sadiq Khan to Muslim "extremists"

Zac Goldsmith's campaign was overseen by the firm of Australian election strategist Lynton Crosby. The campaign included sending leaflets to voters with Hindu and Sikh-sounding names saying that Sadiq Khan would place heirlooms at risk by placing a wealth tax on family jewellery. Pamphlets also made an issue of Khan not attending a welcome ceremony for Indian Prime Minster Narendra Modi at Wembley Stadium in 2015.

Such strategies are sadly nothing new. In his 2007 book The Hollow Men: A study in the politics of deception, Nicky Hager includes an entire chapter detailing the methods used by Crosby's firm C|T Group in Britain and New Zealand. The book is the product of a series of leaked internal NZ National Party correspondence and emails obtained from disgruntled political staffers, party supporters in business, conservative think tanks, pollsters and fringe fundamentalist churches during the period of the leadership of Dr Don Brash.

The book provides detailed material on the methods and messages C|T shared with the NZ National Party. These included techniques to identify the prejudices of "soft" voters, which included using immigration as a wedge, especially if it meant stealing votes from more extreme anti-immigrant parties.

It all sounds terribly familiar. It's a shallow form of conservatism based not upon values but prejudices. It seeks to replace the sound aspects of the status quo and gradual reform with a political order built upon the manipulation of underlying divisions.

But in the London mayoral election, such strategies repeatedly backfired. For instance, in an interview with the Evening Standard, Zac Goldsmith made an issue of Sadiq Khan sharing the stage with an alleged Muslim extremist Imam Suliman Gani.


To share a platform nine times with Suliman Gani, one of the most repellent figures in this country, you don't do it by accident. 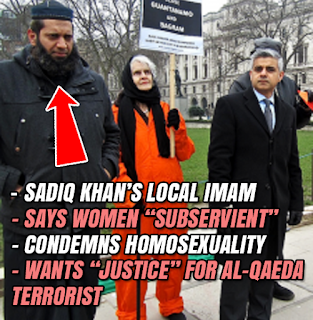 To his credit, Khan did not respond. He didn't need to. Gani soon tweeted a photo of himself standing with a smiling Zac Goldsmith. Gani had also openly endorsed and supported another Tory candidate in the 2015 general election.

It was a formidable barrage of innuendo and Muslim-phobic prejudice thrown at Sadiq Khan by devout Muslim Imran Khan's former brother-in-law. Khan's Muslim heritage wasn't referred to. It didn't need to be. The subliminal message was clear – a person of Pakistani Muslim heritage with alleged links to terrorists (heck, don't they all?) should not be entrusted to the mayoralty of a major Western (and hence white Christian) city. 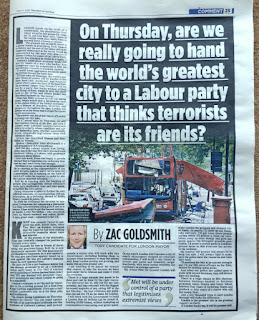 What the Tories and their pollsters failed to realise is that London's Indians don't all support Indian PM Narendra Modi. Even if they did, Modi is not seeking election as London mayor. Tamil voters are not just fixated with jewellery. Simon Hattenstone reports in The Guardian about a letter received by Barbara Patel, a retired biochemist whom some smart cookie at Conservative HQ had imagined to be a Gujarati Hindu. In fact she was white and Jewish, her husband's family being Muslim!

Conservatives need to come to terms with the fact that all us non-whites are not an angry divided rabble who make voting decisions based upon some Anglo stereotype. We care about the same issues anyone else does. Poor Londoners, whether Hindu or Sikh or Jewish or Muslim or Catholic or Callithumpian really don't care about whether the mayor delivering them affordable housing meets the stereotype of a toff or a terrorist.

If Cypriot Turkish Muslims in the inner south of Melbourne can vote for a Jewish MP for Melbourne Ports and Filipino Catholics in Mount Druitt for a Muslim MP for Chifley, why can't Londoners of all persuasions vote for the son of a Muslim bus driver? As for me, I'm just happy another solicitor has taken power. 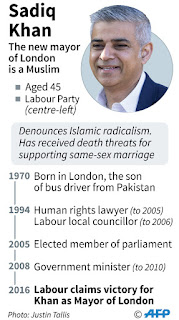 Irfan Yusuf is an award-winning author and lawyer who in his past life was a federal Liberal candidate for the western Sydney seat of Reid in the 2001 federal election. First published in the Canberra Times on 12 May 2016.
Posted by Irf at 8:57 pm