CRIKEY: Stuff the dirty dunnies, it’s the religious violence that could halt Delhi 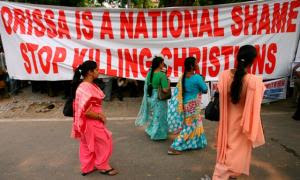 Yes, many Indians are very embarrassed over the poor state of the dunnies at the athletes’ village in New Delhi. They’ve openly been writing about it, not ashamed to lash out at the government or even at themselves. One columnist wrote that the urban elite were deluding themselves:

Just when we were patting ourselves on the back for having become an economic dynamo and a growing ‘soft’ superpower represented by Bollywood and yoga, basmati rice and tikka masala ready to take over the world, the Commonwealth Games debacle has come as a slap across the national face.

And Western reporters faithfully reported this collective masochism while ignoring the story Indians were genuinely nervous about. Having dust on one’s dunny is something many Indians can live with. But would the Games be enough to stop some ordinary citizens transforming into religious warriors and slaughtering one another over a 16th century mosque demolished in 1992 to build a Hindu temple? How do you explain to Australian readers that the Cronulla riots were a Sunday picnic compared to the rioting and looting and murder that took place across India after the demolition?

Indians are now nervously praying riots aren’t repeated in response to the recent judgment in the Allahabad High Court in what has become known as the Babri Masjid case. The ancient mosque was built by Mughal Emperor Babar on the alleged birthplace of the Hindu god Rama at Ayodhya in northern India. The decision awards one third of the property to the Muslim religious trust and two thirds to two Hindu groups. Some argue the decision effectively reward the fanatics who tore the mosque down, and who subsequently went on a rampage of violence and looting.

That incident also transformed India’s political landscape. Mahatma Gandhi was murdered in 1948, shortly after independence, by Hindu fanatics who resented his efforts to maintain inter-communal peace and who wanted to implement a virtual theocracy inspired by a far-Right ideology called Hindutva. For years, the Hindutva mob were considered freaks by the political mainstream. The destruction of the Babri mosque and the alleged restoration of the birthplace of a god millions of Hindus revere enabled the Hindutva crowd to hijack the private devotion of followers of perhaps the world’s most tolerate religion.

Eventually the ragtag Hindutva groups aligned themselves with a political party called the BJP. The current BJP website has removed essays such as Semitic Monotheism: The Root of Intolerance in India. But how do these ideas translate on the ground?

Suketu Mehta, author of the 2004 book Maximum City: Bombay Lost and Found, describes meeting with Hindutva zealots who describe a typical scene from the 1992-93 riots as told to him by one “Sunil”:

“Those were not days for thought,” he continued. “We five people burnt one Mussulman. At four am after we heard of Radhabai Chawl, a mob assembled, the likes of which I have never seen. Ladies, gents. They picked up any weapon they could. Then we marched to the Muslim side. We met a pavwallah on the highway, on a bicycle. I knew him; he used to sell me bread every day.” Sunil held up a piece of bread from the pav bhaji he was eating. “I set him on fire. We poured petrol on him and set him on fire. All I thought was, ‘This is a Muslim’. He was shaking. He was crying, ‘I have children, I have children!’ I said, ‘When your Muslims were killing the Radhabai Chawl people, did you think of your children?’ That day we showed them what Hindu dharma is.”

The scene in Delhi was much the same. And it didn’t just happen in Delhi and Bombay immediately after 1992. It was repeated in the 2002 massacre in the state of Gujrat, where textbooks are being modified to glorify Hitler and downplay Gandhi.

And if you think Muslims have been the only victims, ask yourselves why our conservative Catholic commentariat ignored the story of the 2008 massacres of Catholics in Orissa?

This is the kind of stuff most Indians are scared of. The dust-sensitive backsides of foreign athletes don’t rate very highly when the prospect of communalist violence is very real. 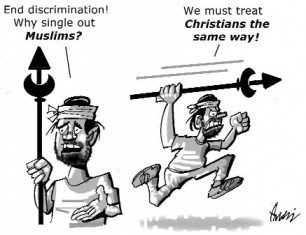 First published in Crikey on 1 October 2010.