BOOK REVIEWS: Of ignorance and hubris

I STUDIED law at Macquarie University in the early 1990s when the dominant teaching methodology was critical legal studies. The "Crits" encouraged us to approach the law in a critical manner, and to critique both the policy and process of formulating legislation.

Not all lecturers were Crits. My commercial law lecturer was a socially conservative professor who regarded the Crits with disdain.

"How can students with no background in law be expected to criticise it? Surely you must learn the law before criticising it?" he would rhetorically ask.

Australian law is a complex beast. Hence, this characteristically conservative warning against critical hubris was difficult to ignore. Now, we find many alleged conservatives ignoring my lecturer's advice when they critique the complexity of religious cultures of more than one-fifth of the world's population who describe themselves as Muslim.

The three books reviewed give some idea of what happens when the critique of Islamic theologies and Muslim cultures is based on minimum understanding and maximum hubris.

Hanifa Deen sits on the cultural fence. A descendant of Pakistani-Muslim hawkers who arrived in Australia at the beginning of the 20th century, Deen grew up in Australia. She has written extensively on Muslims in both Australia and the Indian subcontinent.

Her previous book, Broken Bangles, dealt with the lives of women in Pakistan and Bangladesh. After that book, Deen became curious about the plight of Dr Taslima Nasreen, a Bangladeshi medical doctor and writer whose 1993 novel, Lajja (“Shame”), caused controversy across the subcontinent. After being charged with the offence of “injuring religious sentiment” and threatened with violence, Nasreen went underground before escaping to Sweden.

Nasreen's case happened barely a year after the fatwa issued by Iranian spiritual leader Ayatollah Khomeini against Salman Rushdie for the allegedly blasphemous Satanic Verses. For many free-speech campaigners, Nasreen was seen as a Bangladeshi Rushdie. But as Deen's book illustrates, Nasreen started out as the heroine: not of Western free-speech campaigners but of a certain faction of Indian politics interested less in freedom and more in perpetrating violence against Indian minorities.

Nasreen's plight was manipulated by far-right Hindu extremists associated with the group responsible for the assassination of Mahatma Gandhi. The media mythology around Nasreen's flight from Bangladesh relied heavily on Indian sources as fanatical as the Bangladeshi mullahs who threatened her life.

A frequent theme of Nasreen's work is the oppression of women in Bengali-speaking cultures. Yet Bengali women's groups view her abrasive man-hating style as counterproductive. Feminists working under difficult conditions tell Deen of being suddenly forced two steps back by Nasreen's work after their years of struggle to take a step forward.

Eventually, Nasreen's abrasive style led to her falling out with her European sponsors. Deen has travelled across the Indian subcontinent and Europe, interviewing Nasreen, her family, her supporters and detractors. Deen's book provides important background on how the Taslima Nasreen myth was made and unmade.

This is a book that should have been published at least five years ago, when those intoxicated by the Nasreen myth were beginning their collective hangover.

Unfortunately, Deen's book suffers from detail overkill. At times, she provides less detail on what her informants told her and more on what was on their dinner menu.

Superfluous detail of menus and travel itineraries also feature in Peter Manning's otherwise well-intentioned and enlightening book. Manning is no stranger to the Australian media, having worked in print, radio, TV and online. His book represents the discovery of his own (and no doubt so many other media practitioners’) tendency to treat anything related to Muslims and the Middle East as a giant incoherent blob known as "them". This entity is necessarily hostile to another confused and confusing entity known as "us", which can include any combination of Australia, the United States, other Western countries and Israel.

Manning explores this simplistic bipolar paradigm that, he argues, is the source of so much blatantly biased and ignorant reporting. What Manning describes as "the basics" of journalism – "accuracy, fairness and comprehensiveness" - have been absent from the reporting of “them”. This absence was even more noticeable after the September 11 terrorist attacks. 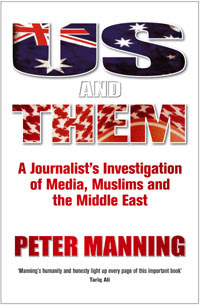 Apart from analysing news stories and working with Arab and Muslim media activists, Manning travels to the Middle East to discover the reality behind “them”. He soon discovers the gulf between “us” and “them” to be more a figment of the imaginations of both sides.

Bethlehem, the subject of classroom Christmas carols, shocks him into recognising that the basis of the Christian “us” is inherently Middle Eastern. He also discovers that the most vocal critics of Israel are frequently Israelis themselves.

At times, Manning's analysis and choice of words seems clumsy, if not simplistic. Perhaps this is deliberate, enabling his message to be accessible to the widest possible readership.

Notwithstanding, this is hardly the work of a blindly pro-Muslim sycophant. At the height of the Hilaly affair late last year, Manning defended media reporting of the saga.

Manning's wide travels and broad exposure to many different Muslim cultures is apparent in his book. It’s certainly absent from Melanie Phillips’s confused and confusing polemic, which she describes as "an attempt to piece together" a "complex jigsaw puzzle, and to show how the deadly fusion of an aggressive ideology, and a society that has lost its way has led to the emergence of Londonistan". 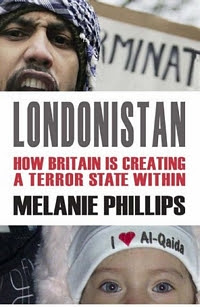 Phillips claims her book "is not drawing any conclusions about whether or not Islam is intrinsically a religion of violent conquest". She acknowledges that "hundreds of thousands of Muslims have no truck whatsoever with terrorism". Strangely, she also places Britain's Muslim population at about two million. If hundreds of thousands of Muslims have no time for terrorism, simple arithmetic says at least one million do.

Phillips suggests that if radical Islamists are to be defeated, Britain and the West need to turn back the clock and return to their Judeo-Christian heritage. The whole idea of a "Judeo-Christian" culture in the West seems strange, given that a distinguishing feature of pre-1945 European Christendom was anti-Semitism of varying degrees of virulence. It seems the only role the Judeo could play was second-class citizen to the Christian. As it happens, Phillips describes anti-Semitism as "the oldest hatred, a hatred that is global and doesn't ever go away".

Her chapter entitled "The Human Rights Jihad" blasts the EU for imposing a human rights treaty on asylum-seekers containing provisions that don't sit comfortably with Britain's common law tradition. She then condemns judges for establishing and following precedents when dealing with asylum cases.

Perhaps at this point, it would be useful to reintroduce my old commercial law tutor, who would probably recognise Phillips's complete lack of understanding of how the common law works.

Phillips’s book is saturated with inaccuracies and wild claims. Perhaps her stand-out point is where she describes radical Islamism as "the dominant strain" in the Muslim world. Yet only three out of 50-plus Muslim-majority states are known to be theocracies Iran, Saudi Arabia and Sudan. Few British Muslims migrated from these countries.

It’s unfortunate that as crucial a topic as the spread of political Islamist ideology in Western Muslim communities has been handled so shabbily. We know there are people seeking to blast their way into a demented form of martyrdom and take many of us with them. It's clear Melanie Phillips has little chance of finding them.

Irfan Yusuf is associate editor of AltMuslim.com. This review was first published in the Canberra Times on 17 March 2007.