BOOK/POLITICS: The Education Of A Young Liberal 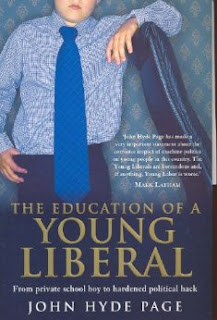 If a day is a long time in politics, how long would one describe a decade? This was roughly the period of John Howard’s prime ministership, which ended in such a spectacular fashion last November after a bunch of Liberal Party apparatchiks were caught out spreading a bogus pamphlet containing the kinds of messages John Howard’s favourite columnists and shock jocks were famous for.

A decade is also the period spent by both John Hyde Page and yours truly in the NSW Young Liberals. In my case, “double dipping” rules meant one could still be an adult member of the Young Libs (the cut-off age was 30) and the “senior” party simultaneously. It was also a time when Young Libs gatherings were dominated by all kinds of adult activities, including the sort of activities one might see in an adult movie. Not that I’ll admit to watching any such activities (even in the movies).

Young Libs (especially the self-styled moderates) have often seen themselves as the conscience of the Liberal Party, criticising conservative excesses in both the “senior” party and Liberal Parliamentarians. It was a Young Liberal who tipped off ALP campaigners in Lindsay about the “Ala Akba” pamphlet, triggering off a sting operation that led to the prosecution of senior Liberals including a member of the NSW State Executive.

John Hyde Page spent much of his sojourn in the NSW Young Libs fighting my old political allies. Many of the events he describes early on in his The Education Of A Young Liberal are ones I participated in toward the end of my active membership. At the time, we thought we were making Australian political history. Reading Hyde Page’s book confirmed in my mind just how silly we were to entertain such political fantasies.

For a man of his age, Hyde Page has produced a surprisingly mature account of the operation of political structures within the Liberal Party. Certainly any young moderate who saw (and still sees) the stranglehold of the religious right in the NSW Young Libs will succumb to premature ageing.

Yet Hyde Page’s work is not a serious or pompous tome. Indeed, even a former conservative warhorse like myself found many occasions to laugh at factional stoushes which at the time were the source of political bipolar disorder – the elation of a successful branch stack followed by the depression of finding out the Annual General Meeting of the stacked branch had been knocked out for technical reasons.

The book was the subject of at least one defamation action brought by conservative party members. The offending chapter, provocatively entitled “Meeting With Nazis”, didn’t exactly provide glowing references to some of my old factional allies. Hyde Page describes some rightwing cadres he met as “spruiking enthusiastically like a used-car salesman”. He writes of the Machiavellian-ness of one conservative hack in these terms: “I got the impression that you never found out what [he] was really thinking, no matter how much time you spent with him”.

To his credit, Hyde Page doesn’t reserve his often devastating wit on his former opponents. In this respect, his work describes not just inter-factional warfare but also intra-factional intrigue. Much of this was played out in the context of two highly contested preselections in the blue ribbon eastern suburbs seat of Wentworth, now held by Liberal Party leadership aspirant Malcolm Turnbull.

Wentworth changed hands twice during Howard’s term in office. It was first held by former Tourism Minister Andrew Thomson, a member of the conservative wing. Thomson was the subject of a preselection challenge from former Young Liberal President Jason Falinski, a moderate. Hyde Page actively assisted in branch development (read stacked branches) in the Wentworth electorate against Falinski and in favour of another moderate, former Liberal Party President and barrister Peter King.

Hyde Page and his allies’ brazen tactics included holding a barbecue at the University of New South Wales during which free beer and sausages (financed from a factional slush fund) were handed out to students who agreed to fill out membership forms. He was rewarded for his efforts by Peter King MP in the form of employment in King’s electorate office. To say that Hyde Page’s anti-Falinski role made him persona non grata with many in his own faction would be an understatement. His status was only made worse with many of Hyde Page’s new moderate opponents supporting Malcolm Turnbull’s tilt for the seat.

You don’t need to be an expert on factional politics or the operation of political parties to enjoy this work. Hyde Page colourfully describes such dark political arts as branch-stacking, ballot-rorting and constitutional hair-splitting. Hyde Page’s flippant, humorous and highly engaging writing style would have to make him the closest thing to a more conservative Mungo MacCallum, or perhaps even a less conservative PJ O’Rourke. Not a bad plug from a former factional opponent!

This review was first penned in 2008. It is finally seeing the light of day after accidentally located on an external hard drive at the bottom of a pile of papers in the author's exceptionally messy study.
Posted by Irf at 11:26 pm No comments: