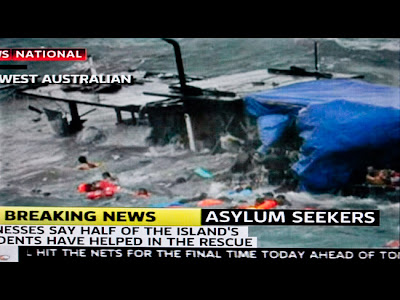 Oh, to have been a fly on the wall of the United States embassy in Canberra last November. And to be sitting there watching and listening as that unnamed ''key Liberal Party strategist'' that boat people was a politically ''fantastic'' issue with ''the more boats that come the better''. And if, for no other reason, than to know who that imbecile strategist was!

Oh, to now be a fly on the wall of that strategist's office and see his or her face watching images of the Indonesian fishing vessel with 100 Iranian and Iraqi asylum-seekers on board crashing against the coastal rocks of Christmas Island.

Of course, the political logic of the strategist's comment to US diplomats is really quite straightforward. If the boats stop coming, Tony Abbott would look like a right royalist fool by standing up on Manly beach, budgie smugglers and all, and screaming at the top of his voice: ''Stop the boats!'' If there were no boats hitting Christmas Island, how would voters in nearby marginal Queensland seats feel threatened enough to vote for the Liberal National Party?

And of course, this madness is all the result of our obsession with border security. To secure our borders, we go to faraway places and take part in wars against enemies, many of whom have never heard of us. What we don't seem to realise is that when we take part in wars, we have obligations. We have an obligation that is triggered as soon as hostilities cease and our leaders feel triumphant enough to declare ''mission accomplished''. It's an obligation in international law to restore and maintain basic law and order for the lucky citizens not ripped to pieces by our weapons.

Now let's look at the record in Iraq and Afghanistan. Basically it can be summarised like this: we came, we saw, we conquered, we unconquered and we lost control. Any MP or pundit who thinks Iraq and Afghanistan are bastions of stability should spend Christmas with their family in a "holiday house" in Kandahar or Basra.

Many Iraqis don't celebrate Christmas. One of the most important religious festivals in Iraq is Ashura. It isn't easy celebrating when suicide bombers are out to blow themselves, you and your family to pieces on a holy day.

And if you do happen to celebrate Christmas, things aren't much better. A siege of the Our Lady of Deliverance church on October 31 left 52 worshippers dead. In such an environment, is it any wonder so many Iraqis and Afghans are fleeing?

But Andrew Bolt and other allegedly conservative bloggers keep reminding us of the existence of an orderly queue. Everyone should just take a ticket and patiently stand in the queue and wait for their number to be called.

So where does the queue start for Iraqis? We know that many fled to neighbouring Syria, where living conditions were described in a UNHCR survey conducted in July and August at the Waleed border crossing between Syria and Iraq. One extended family of 13 people was living in a one-bedroom unit.

Syria now holds 290,000 Iraqi refugees, more than 70 per cent of whom have lived there for at least four years. And back in May 2007, The New York Times reported that thousands of Iraqi women have been forced to work in prostitution. The report said:

Aid workers say $50 to $70 is considered a good night's wage for an Iraqi prostitute working in Damascus. And some of the Iraqi dancers in the crowded casinos of Damascus suburbs earn much less ... From Damascus it is only about six hours by car, passing through Jordan, to the Saudi border. Syria, where it is relatively easy to buy alcohol and dance with women, is popular as a low-cost weekend destination for groups of Saudi men.

One Iraqi prostitute told the reporter:

The rents here in Syria are too expensive for their families. If they go back to Iraq they'll be slaughtered, and this is the only work available.


This is the orderly queue we hear about. Imagine what evil people would use people smugglers to jump from such a safe and secure environment. Surely the average Aussie, let alone Bolt and Scott Morrison, would happily bring up their families in such circumstances than spend six months in a leaky boat.

If you had to choose between selling one's daughter into prostitution and borrowing thousands to hit the high seas, the choice would be obvious. If Australian voters were more aware of the realities refugees from Iraq, Afghanistan and Iran must face, they would punish politicians who used imbecilic terms like "queue-jumper".

If anything good comes out of the Christmas Island tragedy, it will be that Australian politicians will have received a reality check. Demonising the most vulnerable should now become political suicide. Voters don't have the stomach for images of children smashed against rocks and drowning, even if it means a more humane and sensible asylum- seeker policy.

Finally, here's a Christmas gift idea. Australian-Vietnamese entertainer Ahn Do has just published his memoir The Happiest Refugee: The extraordinary true story of a boy's journey from starvation at sea to becoming one of Australia's best loved comedians.

Irfan Yusuf is a lawyer and author of Once Were Radicals. This article was first published in the Canberra Times on Monday 20 December 2010.

UPDATE I: The following letter to the editor was published in the Canberra Times on 22 December 2010:

Good on you Irfan Yusuf for reminding our politicians what drives the Iraqis, Afghans and others to turn their back on their own country and seek refuge in a foreign land ("Asylum-seeker shame rises for some political pundits," Dec 20, p9). These people, who had hoped that the West would rescue them from the clutches of their wicked rulers, now realise that their safety and security was hardly the concern of the armies that dropped in to liberate them. The least we can do for these desperate people is to rescue them from the new evil which our poorly planned mission helped create. 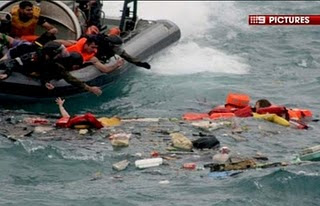