It must have been an awful feeling for one of Australia’s most loved and hated columnist, a rare moment when he did not enjoy the limelight. But dressed in his dark blue suit and a tie that almost matched the colour of his greying hair, columnist, blogger, TV and radio personality Andrew Bolt was genuinely phased by the judgment of a single Federal Court Judge. For a man who otherwise never shies away from talking about race, Bolt wasn’t amused about being found to have breached the Racial Discrimination Act.

Bolt described the judgment as

… a restriction on the freedom of all Australians to discuss multiculturalism and how people identify themselves. I argued then and I argue now that we should not insist on the differences between us but focus instead on what unites us as human beings.


I personally haven’t read all 470 paragraphs and 143 pages of His Honour Justice Brmberg’s judgment. But the word “multiculturalism” certainly isn’t prominent enough for it to feature in the Catchwords on the first page.

Multiculturalism does appear, however, in the 8-page summary of the judgment. In paragraph 15, His Honour remarked:

Whether conduct is reasonably likely to offend, insult, humiliate or intimidate a group of people calls for an objective assessment of the likely reaction of those people. I have concluded that the assessment is to be made by reference to an ordinary and reasonable member of the group of people concerned and the values and circumstances of those people. General community standards are relevant but only to an extent. Tolerance of the views of others may be expected in a multicultural society, including from those persons who are the subject of racially based conduct.


In paragraph 22, His Honour notes:

In reaching those conclusions, I have observed that in seeking to promote tolerance and protect against intolerance in a multicultural society, the Racial Discrimination Act must be taken to include in its objectives tolerance for and acceptance of racial and ethnic diversity. At the core of multiculturalism is the idea that people may identify with and express their racial or ethnic heritage free from pressure not to do so. People should be free to fully identify with their race without fear of public disdain or loss of esteem for so identifying. Disparagement directed at the legitimacy of the racial identification of a group of people is likely to be destructive of racial tolerance, just as disparagement directed at the real or imagined practices or traits of those people is also destructive of racial tolerance.


Is His Honour really seeking to limit freedom to talk about (let alone criticise) multiculturalism? Read the rest of the summary. Remember, it’s only 8 pages.

As for Bolt suggesting that he has always insisted on the things that unite humanity, do yourself a favour and just read the comments that he allows to appear on his blog whenever he writes about just about any subject.

Posted by Irf at 5:53 pm No comments: Links to this post

It was bound to happen. That American-owned newspaper that likes to call itself The Australian has shown itself to be the 'Heart of the Nation' with a vicious and vitriolic attack on La Trobe University academic Robert Manne.

And why? Because Professor Manne wrote 25,000 critical words about the paper.

And in its response, The Oz left not a single angle uncovered, with even an exceptionally tasteful cartoon showing Manne ... wait for it ... sitting naked on the toilet and farting.

It really was intelligent stuff from The Oz. I'm just wondering whether they had to tap Manne's phone to put all this together.

Then again, to be fair, Manne probably doesn't keep his mobile in the dunny.

Perhaps the most hilarious feature of the critique was that they couldn't get regular indigenous writer Noel Pearson (or indeed any indigenous writer) to respond to Manne's criticism of The Oz's coverage of indigenous issues. Instead, Uncle Chris Mitchell from the WelovetheNTIntervention Tribe was given (or rather, gave himself) the task of responding.

Seriously, is it any wonder The Oz is fast losing as much credibility as it is readers and revenue? Perhaps they should stick to printing shonky op-eds.

I feel sorry for all the genuinely good journos and writers and photographers and other media professionals who have to share page and website space with this kind of near-psychotic babble. I mean, all that vitriol for one single politics academic?

UPDATE I: A regular writer for The Oz (who once wrote for Crikey) goes completely ballistic on his Facebook wall, describing Manne's


... grotesque and evil approach to the Malaysian solution ...

Posted by Irf at 5:12 pm No comments: Links to this post

DIVERSITY: Ten years on, 9/13 a milestone for minorities 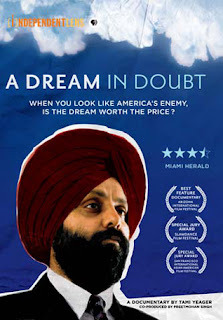 Today is the 13th day of September -- 10 years after an important milestone for the United States and the West. Ten years ago our way of life and our freedoms, our liberal democracy and our rule of law were all assaulted and violated.


No, it didn't take place in New York or Washington. It took place at a small family-run petrol station in Mesa, Arizona. A young man named Balbir Singh Sodhi, sporting a smartly kept beard and a turban, was shot dead. He was planting flowers in the garden of his family business.


But why mention his beard and turban? Was this at all relevant to Sodhi's murder?


When the planes first crashed into the World Trade Centre and the Pentagon, men sporting turbans and beards were all suspected of some kind of involvement. The first pictures released by the FBI of suspected terrorist passengers included men sporting beards and turbans. Even Sydney's Daily Telegraph carried a front page showing a man, his head bowed, sporting a small beard and a blue turban, being taken into custody. The headline screamed "FIRST ARREST".


Turbans and beards were now the symbol of terror. Why? Because Obam ... whoops ... Osama bin Ladin wore a turban.


Frank Silva Roque, 44, of Harvest, Ala., was sentenced to death or first-degree murder in the death of Balbir Singh Sodhi:

Roque was convicted of killing Sodhi, a Mesa gas station owner whom prosecutors said was targeted because Roque thought Sodhi was Arab. Sodhi wore a turban and beard as part of his Sikh faith.


According to an AAP report about Roque's sentencing in 2003, after shooting Sodhi, Roque shot at another gas station where the clerk was a man of Lebanese descent, and shot at the home of an Afghan family. They were not injured.

This was just the beginning. The New York Times reports that

... an eclectic Sikh temple called Gobind Sadan was burnt down by four teenagers who thought that the turbaned worshippers were Muslims and that the temple's sign said 'Go Bin Laden'.


Sikhs, like other minorities, have suffered a disproportionate amount of prejudice since 9/11. They have stood out due to their visible religious devotions including wearing the dastaar, a traditional Punjabi-style head dress.


Paranoia about turbans has become so great that they even became an issue in the US Presidential elections when a picture of Obama wearing traditional clothes of Somali elders was leaked by opponents.


It isn't just about airport searches. Men from certain minorities have been detained more readily and for longer periods of time. Paranoia was even present in the aftermath of hurricane Katrina, when immigrants such as painting contractor Abdurrahman Zeitoun were detained and treated like terror suspects.


The war on terror hasn't just led to imbecilic wars that have killed hundreds of thousands of innocents. It has created a scud missile mentality where at home our collective hatred is hardly ever directed at the right people. Just ask the Sodhi family.

First published in Crikey on 13 September 2011.
Posted by Irf at 6:55 pm No comments: Links to this post