REPORT: A Sunday with Hizb ut-Tahrir: 'forced assimilation' and what the media didn't report

Senior leader Ismail al-Wahwah pointed out that not a single Muslim army was occupying a Western capital while Western armies have occupied numerous Muslim capitals.


The Australian wing of Hizb ut-Tahrir (“Party of Liberation” or HT for short), an organisation ex-PM Tony Abbott wanted to proscribe under anti-terror laws, held its annual conference in Sydney’s Bankstown on Sunday. The theme of the conference was “Innocent Until Proven Muslim” and was promoted with a rather slick video, a Facebook page, another Facebook page, a Twitter presence and no doubt other social media.

The hall was packed with around 700 people, perhaps more. There were more women than men, and the crowd were from all different ethnic backgrounds. There was also a large media contingent, with most TV crews and journalists staying until almost the end. Even an Al Jazeera English crew covered the conference. The scribes enjoyed the free lunch, soft drinks and bottled water along with the rest of the crowd. John Safran was seated up the back and proved to be a huge hit with many outside the hall in the foyer. Two HT guys even posted a selfie with Safran on Facebook.

Outside, police vehicles were doing rounds of the adjacent car park. I had borrowed someone else’s car to get to the conference, and I hope they don’t receive a visit from any law enforcement officials.

Prior to the conference, The Australian took the unusual step of providing prominent space on its opinion page to HT spokesman Uthman Badar. I say unusual because the same newspaper harangued the ABC’s Q&A program for allowing a question from another “radical” Muslim Zaky Mallah. Fairfax also ran a column by Badar. 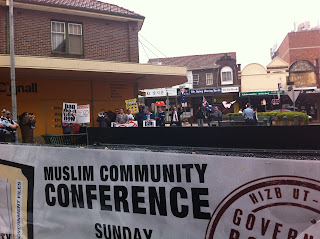 So how does one summarise in less than 1000 words the themes of the conference and all its speakers, as well as active Q&A sessions, all of which ran for around five hours? Media reports available online appeared to focus on a few key themes: singing the national anthem in schools; the alleged targeting of Muslim-looking people at airports; and the use of deradicalisation policies to bring about some kind of forced assimilation.

I understand it’s hard to cover so much material in a short space. But seriously, the reports I saw and read on the conference were disappointing, more for what they left out than for how they reported it. For instance:

One female barrister from the UK (also an HT spokesperson there) sent a recorded message in which she spoke about the impact of the latest changes to the UK government’s deradicalisation program, Prevent, which targets not only violent extremism but indeed any form of deemed extremism. Professionals such as teachers and doctors apparently now have a legal duty to report children showing “signs of radicalisation”. Apparently, even a child as young as three years old has been picked up by the anti-terror radar in this manner. Some of the case studies she cited, including cases involving children with intellectual disabilities, are horrendous. I was a bit sceptical of her claims until I noticed the mainstream British Press filled with reports of such cases.

An independent Victorian lawyer (who was once a New South Wales police officer) spoke at length about the impact of counter-terror laws including the practices of prosecutors. He also criticised the media reporting of terror cases.

The speech of HT senior leader Ismail al-Wahwah, who earned the ire of Jewish organisations for his remarks during a recent Israeli bombardment of Gaza, barely rated a mention. 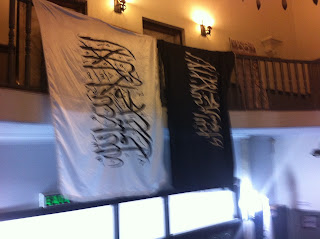 Al-Wahwah made a point that seemed to resonate with the audience. He said not a single Muslim army was occupying a Western capital while Western armies (whether directly or through their puppets) have occupied numerous Muslim capitals such as Baghdad and Kabul. His message was that many young people are affected by events overseas, especially now that unfiltered information from war zones is widely available. Our government’s foreign policy inconsistencies and choices do potentially radicalise young people. They do compromise our domestic security. They also create a flow of refugees that no one benefits from except companies like Transfield. No amount of schoolkids singing the national anthem will change that.

In the quality and professionalism of their publications and online presence, HT can match any major media organisation. HT is the only Muslim organisation to have produced a comprehensive (if somewhat jaundiced) guide to the application of anti-terror law and policy for over a decade. But then, these days just about any group — “fringe” or “mainstream” — can do the same. Just about every primary school kid in Karachi or Bangalore is a whiz kid on the keyboard and can navigate multimedia platforms with ease. Meanwhile, if some media reports are to be believed, our Defence Force can barely keep up with the constant stream of Tweets from Islamic State.

HT can also match the most paranoid newspaper columnist or shockjock when it comes to generalising about the “other”. HT talks about “the West” and “Western leaders” in the same manner and with the same lack of nuance that a Rita Panahi or Andrew Bolt would talk about “Muslim leaders” or that mythical and near-mystical entity they call the “Muslim community”.

First published in Crikey on 2 November 2015.
Posted by Irf at 2:59 pm No comments: Links to this post