OPINION: Freedom of speech is good but must be used wisely ...

Former prime minister John Howard once said that when you change the government, you end up changing the country. There's no doubt that Howard's exit from the Lodge has changed how public discussion on a raft of issues is carried on in this country.

Howard prided himself on allowing freedom of expression to flourish in Australia free from the constraints of political correctness. Yet in some areas, political incorrectness and outright bigotry have not served us well. And they continue to do us disservice.

On national security, advertisements and campaigns (including a very expensive fridge magnet) warned us to be alert but not alarmed. Yet so much of the rhetoric coming out of Canberra, not to mention our involvement in the Iraq disaster and the Howard government's disdain for Australian citizens trapped at the Guantanamo gulag, did plenty to divide different sections of the Australian community without any dividends in terms of increased safety.

Howard rarely hesitated to remind us of that small number of Australians of certain suspect backgrounds who were either hostile or just didn't respect our way of life or refused to integrate into our Christian (or in a rare moment of ecumenicalism, our Judeo-Christian) heritage (perhaps of 40,000 years' standing) or placed pressure on our migration system more than any other group.

Recently in a lecture at Melbourne University, Howard attacked the media for its relentless pursuit and character assassination of a very, very decent man the decent person being Peter Hollingworth whom Howard appointed as governor- general. Hollingworth resigned in May 2003 after outrage when his handling of child abuse allegations during his period as Brisbane Anglican archbishop was revealed. He was accused of showing minimal if any compassion for sexual assault victims in much the same way as Hilaly's comments about uncovered meat and the allegedly disproportionate sentences handed out to the Skaf brothers also showed gross insensitivity to sexual assault victims.

In defending Hollingworth and attacking the media, Howard was playing a role similar to that played by Hilaly's translator and spin-doctor Keysar Trad. Howard also showed his own double standards that underpinned so great a part of the cultural wars he fought so hard.

During Howard's term, almost any terrorism-related arrest or event would be accompanied by some comment about integration or culture or values or our way of life. The war against terror was little more than another instalment of wider culture wars. Meanwhile, practical issues that actually would have made us safer (such as proper airport security) were all but ignored, to the extent that, recently, a few alleged bikies were able to bash a man into virtual pulp at Sydney Airport. No doubt the victim of those attacks wouldn't have been concerned with a certain small portion of non-integrating migrants.

In light of the recent Melbourne terror raids, perhaps it's a good time to remind ourselves of the basic messages which Islamist terrorists are seeking to convince vulnerable young people of.

Firstly, they say that the terrorist agenda is perfectly consistent with Islam. I've yet to hear that message repeated in any mosques in Sydney, Melbourne, Adelaide, Brisbane, Canberra, Wagga Wagga, Griffith, Wollongong or any other Australian Muslim congregations I have visited. But I have read that message recently on the website of a newspaper boasting to be Australia's biggest selling paper.

On Wednesday, August 5, 2009, columnist Andrew Bolt used these words on his blog:

I'm not suggesting Bolt shouldn't be allowed to question the involvement of any belief, religion or ideology in terrorism or violence. But to suggest that certain groups are more culturally susceptible to violence is just plain stupid. To suggest that Somalis or Lebanese or Muslims are more susceptible to violence is like suggesting that conservatives of Dutch heritage are more conducive to racist violence due to their direct participation in the Holocaust, South African apartheid and the colonisation of Indonesia.

The second message the Islamist wackos want Muslim kids to believe is that they will always be marginalised in Australia and will never be accepted as part of the mainstream. And again, it is pundits like Andrew Bolt who confirm this message by furthering a process of marginalisation.

Bolt has used his columns and blogs to engage in vilification of a host of groups:
Somalis, Lebanese, Pacific Islanders, Sudanese, Africans, Muslims and so on. Of course, we still must be concerned about the possible Talibanisation of local Muslims. But those concerns aren't furthered when we have columnists and shock jocks using Talibanesque language.

Groups like al-Qaeda and al-Shabaab want their potential recruits to feel marginalised. Andrew Bolt and others are serving their purpose. Osama bin Laden need not lift a finger when he has at least one Herald Sun columnist doing the job for him.

National security is about keeping all Australians secure regardless of their cultural background. And as our law enforcement agencies know so well, social cohesion is a key element of national security. The logical corollary to this, of course, is that those who threaten our social cohesion, be they imbecilic imams or prejudiced politicians or callous columnists, are threatening our security.

Irfan Yusuf is author of Once Were Radicals: My Years as a Teenage Islamo-fascist (Allen & Unwin, 2009). This article was first published in the Canberra Times on Wednesday 12 August 2009. 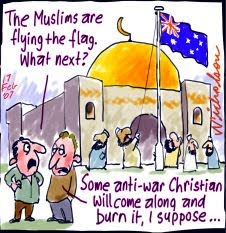 All of the Uighurs in Albania, Bermuda and Palau are living very normal and productive lives -- so we'd be happy if Australia took the four.

Below is a documentary from AlJazeera English showing the experiences of four Uighurs living in Albania.