CRIKEY: Why question defence force loyalty because of religion?

A spokesman for the Defence forces last Friday reiterated this truism:

Eligible people may join the ADF irrespective of their ethnicity, race or religion.

Howe’s column, also published in the Brisbane Courier Mail, began with these words:

There are 2006 Muslims in the Australian Defence Force.

He claims allied Christian soldiers had no hesitation in killing German (presumably Christian) soldiers and civilians during the Second World War, despite the hymn Onward Christian Soldiers being the battle cry. He ends with this:

If the god in any soldier’s life looms larger than his or her responsibility to Australia, we have a problem.

Meanwhile, one of Howe’s more hysterical colleagues, a certain Andrew Bolt, starts his column by what he sees as the first fact a “real journalist” would tell you to explain why the Fort Hood killer did what he did:

The Fort Hood killer, army psychiatrist Nidal Malik Hasan, was a Muslim. He shouted ‘God is great’ in Arabic as he opened fire.

So why question the loyalties of Australian servicemen and women who happen to tick a particular box for religion on their census forms? Is Howe trying to do a Nile?

Perhaps the answer to my question can be found in a fatwa issued by Sheik Rupert bin Murdoch in 2006:

You have to be careful about Muslims, who have a very strong, in many ways a fine, but very strong, religion, which supersedes any sense of nationalism wherever they go.

But how will we tell exactly who is a Muslim? By the colour of their skin? Will a white Bosnian with a Muslim mum and Orthodox dad count as Muslims? Or a white man married to a Muslim woman? Will we know Muslims by what language they speak at home? Most Arabic speakers in Australia are Christian. Again, a fatwa from Ayatollah Murdoch provides guidance: Muslims are the ones with genetic defects from marrying their cousins.

And the best refutation for this bigotry and stupidity comes from Feroze Khan, the father of fallen US soldier Kareem R Khan, who told a journalist:

My son’s Muslim faith did not make him not want to go. It never stopped him … He
looked at it that he’s American and he has a job to do.

Our troops have a job to do. We should allow them to do it and not waste their or our own time with moronic speculations based on isolated incidents. 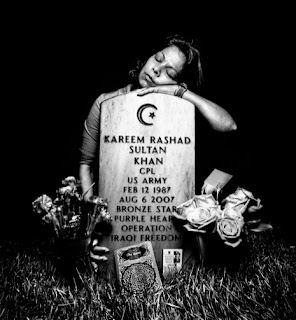