CRIKEY: How to stop a cricket civil war ... 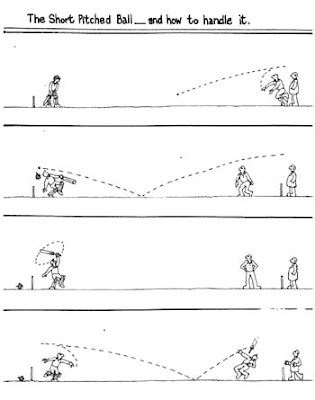 Well, it seems international cricket is about to have its first world war. It started with at least one Indian bastard being found guilty of poking fun at the appearance of an Aussie monkey. Then a heap of other Aussie monkeys retaliated by calling the bastards bastards (presumably to keep them honest, of course!).

Now it seems one monkey’s parents are receiving abusive phone calls, while the Windies are peeved that umpire Steve Bucknor has been dropped despite not having called anyone a monkey or a bastard.

And in a move sure to encourage Billy Birmingham back into the recording studio, the bastards are accusing Ian Chappell and other Channel 9 TV commentators of adding fuel to the fire by their constant replay of controversial decisions accompanied by acidic commentary. In all fairness, I think it’s a bit rich to blame Aussie TV commentators, who are never known to be engaged in controversies over racial slurs. (OK, let’s all cough the following words in unison: “bullsh*t, bullsh*t” in honour of Dean Jones.)

And I imagine Ponting (the poor bastard) is still licking his wounds after being told by Peter Roebuck and other influential cricket pundits to go get sacked.

And all this was caused by the International Cricket Council caving in to the demands of the Board of Cricket Control in India (BCCI, not to be confused with the BCCI, the allegedly corrupt and now-defunct Bank of Credit & Commerce International). Yet even the extraordinary backflip by the ICC may not stop the BCCI from suspending the tour and calling the bastards back home.

I’m not sure what the solution to all this is. Maybe the Pope needs to step in and inject some blessing into the game so that it reflects the same “values of honesty, solidarity and fraternity, especially among younger generations” as soccer.

Actually, the best precedent for resolving this has already been set by Dean Jones and South African all-rounder Hashim Amla. Basically Dean Jones apologised for calling Amla a terrorist, and Amla accepted the apology. Perhaps the bastards should apologise to the monkeys and vice versa. Then they can forgive each other and get on with it while the rest of us dust off our old Billy Birmingham CDs.

First published in the Crikey Daily Alert for 10 January 2007.

UPDATE I: Some responses from Crikey readers ...

Greg Ellis
Thursday, 10 January 2008 2:37:26 PM
Multiple abuser of teenagers Peter Roebuck deserves to have his name connected to a URL too. The fullest account is at: http://www.telegraph.co.uk/news/main.jhtml?xml=/news/2001/10/20/nroe20.xml

Chris
Thursday, 10 January 2008 2:45:00 PM
I hope Yusuf isn's seriously suggesting it is appropriate to refer to a person of African descent as a "monkey", or that it is somehow equivalent to calling someone a bastard. Pathetic article.

Lisa Crago
Thursday, 10 January 2008 4:05:37 PM
THANKYOU Irfan,after all the tension, this comic simplification is a welcome relief from all the dangerous inflamatory commentary we have read from both sides.bring in the pope,lol, sport&politics&religion,hardly cricket fun, plus no mexican wave :(

russell
Thursday, 10 January 2008 5:20:47 PM
Lisa is right.Irfans article shows how ludicrously the whole situation has been inflamed.Nneither countries or ICC come out of the situation with much credibility.Hopefully the tour will continue and all concerned will learn to"play the game" as in past

John BRYAN
Thursday, 10 January 2008 5:20:50 PM
What a pleasure to read something so witty. Crikey needs more of this. Mostly your correspondents take themselves so seriously. And they're righteous. Oh so righteous. Will I subscribe again? Too predictable and angry. And righteous!

Dave Liberts
Friday, 11 January 2008 9:05:27 AM
Check out Kevin Smith's film Clerks 2 for a top debate about whether the term 'porch monkey' is racist. Irfan isn't being racist in this article, Chris Ellis, he's just 'taking it back' (if you don't get this, see the movie). 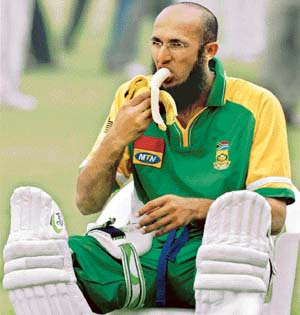 Has this cricketing terrorist suddenly become a monkey?

I wrote this in Crikey back in August 2006. If this matter (which involved a more politically sensitive racial slur) can be resolved, you must wonder why the Aussies and Indians can't resolve the "monkey/bastard" controversy.

During a test between Sri Lanka and South Africa in Colombo, Jones uttered the words “the terrorist has got another wicket” when South African cricketer and devout Muslim Hashim Amla took a catch to dismiss Kumar Sangakkara. Amla sports a beard for religious reasons, and doesn't wear sponsoring brewery logos on his uniform.

So why should viewers jam the phone lines of TV stations in Sri Lanka and South Africa? Well, that's a bit like asking why Americans should be so shocked at Mel Gibson's drunken tirades against Jews?

I hate talking up the existence of powerful lobbies. It makes things sound oh-so conspiratorial. But just as there is a perceived powerful Jewish lobby in the US, Sri Lanka and South Africa also have powerful Muslim lobbies. Around 15% of Sri Lanka's population is Muslim, and they are active in all areas of Sri Lankan life – politics, media, the judiciary and business.

South Africa's Muslims include descendants of the powerful “Memon” merchant clans who migrated from Bombay. (The ones still in Bombay have a major stake in various businesses including Bollywood, IT companies and even smuggling!) South Africa also has a powerful community descended from Malays. These “Cape Coloured” Muslims have intermarried with other nationalities – it's not unusual to meet a Cape Town dude named Muhammad who is part-Malay, part-Dutch, part-Indian with surname “Mathews”.

You don't mess with the South African Muslim lobby. Even during the Apartheid years, the lobby was a formidable force. South Africa was the first country to ban Salman Rushdie's novel The Satanic Verses.

Still, it is good to see the Muslim cricketer involved taking it in good spirits. Back to Mel Gibson, let your sides split as you watch Jackie Mason's interview on FoxNews in which he defends Gibson and lampoons certain lobbyists …

Last year, India marked its 60th independence anniversary. There was much fanfare, lots of boring speeches, and prayers in temples and churches and mosques across the country. But did India come to a standstill? Is the Pope Brahman?

The only thing that shuts down this powerhouse economy is a good old-fashioned religious riot. And this time, we poor West Islanders are in the thick of it.

Over the past week or so, Aussies have learned an important lesson in Indian religion. Forget Yoga, Kama Sutra, palmistry and that other new-wave stuff. India's biggest religion isn't celebrated with incense sticks and mantras, but rather with 15 boofy blokes on a large paddock playing with a pair of polished willow planks and a small hard round thing held together by stitches. And preferably not too much sledging.

Now we Aussies aren't the most religious bunch on the planet. The last Aussie Prime Minister to flirt with ultra-religious groups lost not only the election but also his own seat. He also fitted into that diminishing minority of Australians who show any interest in cricket.

And why shouldn't we be bored with cricket? I mean, we just keep winning match after match. Watching the sports news on TV has become so monotonous - "and in sports news tonight, the Wallabies get thumped by the Auckland High School Under-16s. And in cricket, the Aussies defeat Pakistan by an innings and 1098 runs".

Aussie cricket authorities and their patient sponsors have tried everything to increase interest. All in vain. Twenty20 has been a flop. Winter cricket under cover went down like a lead balloon. Most Aussies couldn't give a toss even about who wins the toss. Because we already know who'll win the match.

The Border/Gavaskar Trophy Series wasn't an exception. As usual, our cricketers were winning while the rest of us were busy joining the ever-present army of semi-clad Kiwi backpackers down at Bondi Beach.

But now something exciting has happened. And it doesn't involve Shane Warne, a cellphone and a pair of Kiwi babes.

Apparently Symonds' colleagues interpreted the remark as an attempt to poke fun at his mixed English-West Indian heritage. In fact, Indian crowds allegedly taunted Symonds by wearing monkey masks and making monkey sounds during the last Aussie tour of India.

The Indians have complaints of their own, blaming poor umpiring for their recent loss. The Aussies have been accused of triumphalism and arrogance.

Huh? Aussies being arrogant? Perish the thought. During the post-match press conference, one Indian journalist asked Aussie captain Ricky Ponting about a questionable catch he took. Ponting, showing all the humility and modesty our cricketers are famous for, responded:

If you are actually questioning my integrity in the game then you shouldn't be standing here.

Harbhajan Singh was found guilty of making a racist slur after a hearing by the match referee held in accordance with cricket rules. He was suspended for three games, but can play pending the outcome of his appeal. The Indians are furious and their peak cricketing body had suspended the tour.

Meanwhile, Ponting has been found guilty in a trial-by-media. Prominent cricket writers like the Melbourne Age's Peter Roebuck called for Ponting to be sacked for his arrogant and abrasive conduct.

Still, the Indians aren't exactly cleanskins. One Australian Indian organisation in Sydney has scored a century for community relations by releasing this statement:

Considering that the Monkey God is one of the revered idols of Hindu mythology and worshipped by millions, it is surprising it was considered a racist term.

Yes, how terribly insensitive of cricket referees not to factor in the intricacies of ancient Indian religious symbols. Next time, if Harbhajan Singh describes Shane Warne as an elephant, we should all presume Singh is referring to the Hindu god Ganesh.

And why stop at Hinduism? My Indian Parsee friends regard fire as sacred. So let's not get offended by Mumbai demonstrators burning effigies of Aussie players and umpires. And apparently in Pakistan, babies are regarded as cute and cuddly. Well take that into account when interpreting former Pakistan captain Wasim Akram telling the Hindustan Times that Australian cricketers are "cry babies".

Jokes aside, racism is serious stuff. Poking fun at someone's appearance is childish and offensive and brings into disrepute what is supposed to be a gentleman's game.

No player should have to tolerate racial slurs, whether from another player, a crowd or even a commentator.

Even if Harbhajan Singh's appeal is unsuccessful, both he and the Aussies should take a leaf out of the book of South African all-rounder and devout Muslim Hashim Amla, who is said to sport the most impressive beard in the game.

When former Aussie test cricketer and commentator Dean Jones was caught out saying on air that Amla was a terrorist, Jones humbly apologised and Amla graciously forgave. The same should happen now. Then millions of Indian devotees can return to cricket worship, while the rest of us head for Bondi Beach.

Irfan Yusuf is a Sydney lawyer whose highest batting score was 16 while playing for the St Andrews Under-14s. This article was first published in the New Zealand Herald on Thursday 10 January, 2008.